The Door to Hope 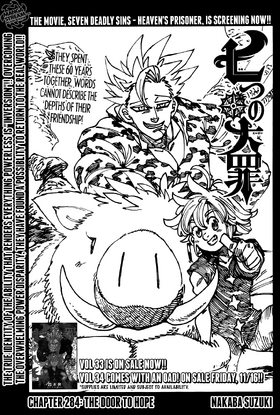 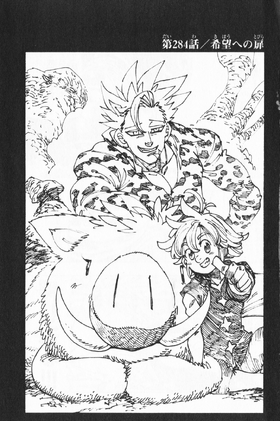 The Door to Hope「希望への扉 Kibō e no Tobira」 is the 284th chapter of the manga, Nanatsu no Taizai.

Meliodas and Ban finally escape from Purgatory, at the cost of Wild's sacrifice

After finding out the weakness of the Demon King's power, Meliodas' emotions, Ban and Wild try to force their way through the Demon King one last time. The Demon King is stubbornly set in do not let them go. Ban hold the Demon King back by using his recently improved power, giving the Demon King his infinite life to greatly weaken him, as Meliodas find a gigantic hole in the ground, confirmed by Wild to be the door out of Purgatory.

A scream makes the two of them to look back, just right to see the Demon King grasping a confused Ban. The Demon King explains that he simply deactivated his magic, thus receiving Ban's technique intended effect instead.

Meliodas quickly gets in action and rescue Ban, telling him to go ahead first and that he will follow him no matter what.

Then father and son start fighting. The Demon King calls him a failure and a destroyer, while Meliodas' emotions talk him back saying that he never had acknowledged him as a father, that he do not has interest in the throne whatsoever, but in ending the war once for all. Angry and disappointed, the Demon King plunges Meliodas into the ground with a sword strike, stating that Meliodas in the real world is the most fitting heir and that the only unnecessary part are his emotions.

As the Demon King is about to finish Meliodas with his sword, Wild intervenes and hit the Demon King, denting his chest armor. Wild have resorted to use Wild Full Throttle, an ultimate technique that gives great power in exchange of life force. The boar kicks Meliodas, throwing him where Ban is, pushing both of them into the hole. The Demon King tries to stop them, but Wild in turn stops him. Unfortunately, this effort was too much for Wild's body, who ends heavily damaged.

In his last moments, Wild regrets not seeing his brother again, but happy to have learned he was alive and about how he had grown. Wild reflexes on his long journey, realizing that his little brother maybe does not need an older bother that he never know about, but actually those two friends.

Q311. Usaringo-san (From Aichi Prefecture): Do you have plans to draw the encounter between Meliodas and Elizabeth from 3,000 years ago?

The Last Page of Chapter 284

Retrieved from "https://nanatsu-no-taizai.fandom.com/wiki/Chapter_284?oldid=149811"
Community content is available under CC-BY-SA unless otherwise noted.