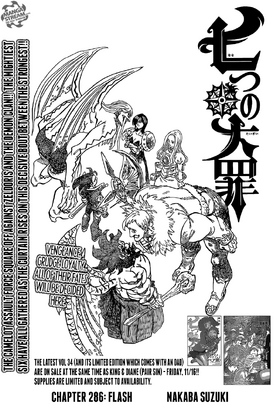 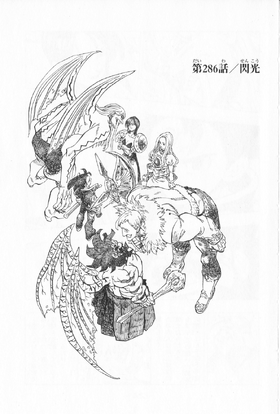 Flash「閃光, Senkō」 is the 286th chapter of the manga, Nanatsu no Taizai.

The Assault Force begin their battle against the highest-ranked Demons, ending with Zeldris prepared to unleash his original magic.

As the Assault Force and the Demons face against each other, Gilthunder exclaims how their presence is overwhelming and Hendrickson claims those six are currently the mightiest on the Earth before noting that not even the Gods can predict the outcome of this battle. Escanor suddenly slashes with Rhitta. Chandler blocks it with his staff but the shockwave of the attack carries on, prompting Zeldris to slightly turn his head to the left to dodge while Cusack flew up to dodge. After Cusack lands, Zeldris asks if Escanor's satisfied. It is then revealed Escanor's attack was aimed at the cocoon and he calls it impertinent that it was able to remain unscathed from his attack. Angered that he tried to break the cocoon Meliodas is in, Chandler declares he'll kill any who pose a threat to the Young Master.

Teleporting above the Demons, Merlin performs some hand signs and says he may find that to be impossible before casting Double Impact. The attack pushes Chandler and Cusack back a bit while Zeldris remains completely still. From the aftermath, it's revealed that Chandler and Cusack suffered scratches while Zeldris remained completely unharmed. Merlin inwardly asserts that these are monsters far above the likes of the Ten Commandments. When Chandler and Cusack fly at her, she gauges their Combat Class to be 173,000 and 168,000 respectively. Escanor comes inbetween them and blocks the Demons' attack but gets pushed back. Gaining ground, Escanor yells out for Merlin when the two try to attack from behind. Merlin then snaps her fingers and the two are pushed back.

Merlin then inwardly admits that their strength isn't anything to laugh at but the key to ending the battle is finding how to turn Meliodas to normal, not numbers. Chandler and Cusack questioned what kind of strange trick Merlin used to push them back, only for Ludociel to appear behind them and say that it wouldn't have been worth teaming up with her if she wasn't capable of that much. He then unleashes an attack that sends them flying into opposite walls. As Chandler identifies the move as belonging to Ludociel the Flash, Cusack notes how slow the body moves when you get older. As Ludociel confronts Zeldris and manifests his wings, Merlin recalls how she said numbers aren't everything and gauges Ludociel's Combat Class as 201,000, noting his strength was absolutely necessary to get through the dark barrier.

Ludociel reveals he knows Zeldris's swordsmanship is the fastest in the Demon Realm before questioning if it's really as fast as they say. The two then exchange a number of sword slashes, too fast to see. After the exchange, Zeldris earned a cut to his right cheek while Ludociel earned a cut on his left cheek. A larger cut then appears on Zeldris's right arm, much to Cusack's anger. Ludociel calls Zeldris cruel for harming a woman's face and asks if he learned from his older brother about how to treat a woman. Gilthunder exclaims about how Zeldris injured Margaret's body when Hendrickson suddenly runs forward. Zeldris fires back at Ludociel by claiming his brother wouldn't do something as crude as taking over a woman's body. Hendrickson suddenly grabs Ludociel and warns him to watch out as an explosion suddenly occurs. As Chandler and Cusack appear next to Zeldris, Hendrickson grips the wound on his left leg.

Ludociel calls him an idiot for trying to save him when he knew that Cusack was going to attack and calls him a hopeless fool. Ludociel then heals the wound on Hendrickson's left leg, telling him he appreciates his willingness to save him before recommending he stay back and watch. Zeldris comes up behind Ludociel, only for Ludociel to turn around and fire Gold Shining. Ludociel tells Zeldris to burn in agony from his Grace, Flash, only to then be mildly surprised when he sees Zeldris unharmed by the attack, even if it was a demonstration and guesses that it's the work of the magic the Demon King gave him. Zeldris suddenly gets into a stance and both Chandler and Cusack back up near a wall in fright. Cusack notes Zeldris's particular stance while Chandler wishes he would've told them he was planning this. As darkness creeps up and surrounds Zeldris, he declares he will show off his true magic.

Q313. EscanorVegeta-san (From Saudi Arabia): Between Galand and Chandler, who is the oldest?

Nakaba: Chandler. Even within the Demon Clan, those two may be the oldest ones.

The Last Page of Chapter 286