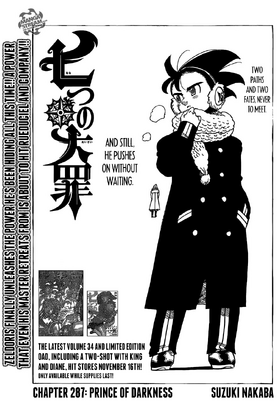 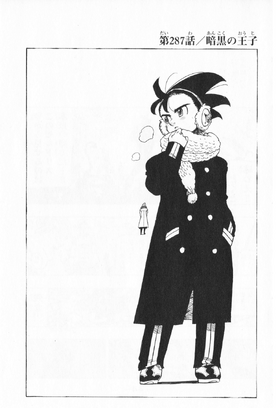 Prince of Darkness「暗黒の王子, Ankoku no Ōji」 is the 287th chapter of the manga, Nanatsu no Taizai.

After Zeldris declares he'll show off his true power, Escanor hopes it isn't a bluff while Gilthunder is left trembling, his teeth chattering. Ludociel instructs Hendrickson to stand back as he can't guarantee his safety anymore. Chandler and Cusack stick their arms into the wall behind him, remarking about how they won't get a turn. Zeldris then recalls the words Meliodas said to convince him to work for him: "Gelda is alive." Meliodas told Zeldris how, 12 years ago, Gelda awoke with the rest of the Vampires and upon realising her fate with him, she tried to choose death. Instead of granting her wish, he sealed her once more, to wait for the right time. Zeldris then thinks back to when he sealed away the Vampires. Gelda told them he isn't doing anything wrong and promised to keep dreaming about her days with him. Ludociel aims his rapier at Zeldris and declares that victory in this Holy War will belong to the Goddess Clan.

Raising his sword and pointing it up, Zeldris admits he never cared about the Holy War, prompting Cusack to frown. Zeldris then activates his true magic, Ominous Nebula. Suddenly, the entire Assault Force are lifted off of the ground and forcibly pulled towards Zeldris. Zeldris yells at them to stay out of his way and they are suddenly attacked, blown back into a wall. Hendrickson and Gilthunder were rendered unconscious, Escanor was injured and Ludociel's armor was cracked. He questions how he was attacked, only for them all to begin getting sucked in again. Ludociel sticks his rapier into the ground and holds on while Escanor forcibly embeds his legs into the ground. Escanor looks around and questions where Merlin is. Seeing the two unconscious getting near Zeldris, Ludociel calls out to Hendrickson and the two are suddenly teleported away. Merlin then appears, with Hendrickson and Gilthunder, and says they're safe but they're still in hot water.

She begins getting pulled in before teleporting further away. Chandler exclaims she's continually using Teleport to stay away from Zeldris, a feat only she can pull off, thanks to Infinity. But Cusack claims only running will delay the inevitable. After sighing about how Hendrickson causes him to worry too much, Ludociel dislodges his rapier and lets himself get pulled in by Zeldris. He claims to have seen through Zeldris's swordsmanship and is confident he will be able to counter, only to be proven wrong when an unknown attack hits him again, blasting him against the wall, breaking his armor and rapier. Ludociel gets pulled in again, only to be stopped when he accidentally falls onto Escanor's back and holds on. Ludociel asks Merlin what Zeldris's magic is and Merlin claims to have deduced three key attributes of Ominous Nebula. The first is that it generates a force field that sucks in things towards him. The second is that it can only pull in living beings.

The third is that their attacks are unable to reach him and instead, they are hit by an unknown attack. Merlin then recalls how neither her magic nor Ludociel's affected Zeldris before his Ominous Nebula was engaged and that's thanks to the Demon King's magic he holds: God. Declaring he has a high physical resistance and high magical resistance, Merlin says this fight will be much tougher than they imagined. Ludociel asks Escanor for help but Escanor refuses, saying that Ludociel thinking he can order him around is a joke. Ludociel tells him not to be so full of himself and instructs Escanor to help him, a person whose words are the words of the Supreme Deity. Escanor doesn't care and refuses again. Ludociel accidentally lets go in anger and is pulled towards Zeldris. After Merlin tells him to help, Escanor moves one foot forward and after embedding it in the ground, catches Ludociel. Ludociel questions why since he thought Escanor didn't listen to others but Escanor claims Merlin's orders are a different story before asking if Ludociel has a plan, threatening to send him flying if he doesn't. As Zeldris smirks, Ludociel claims he does but it'll only work if Escanor listens to him.

Q314. Rīri-san: How many poems Escanor dedicated to Merlin?

Nakaba: A thousand of two thousand would be too few!

The Last Page of Chapter 287