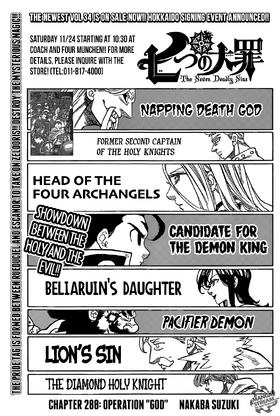 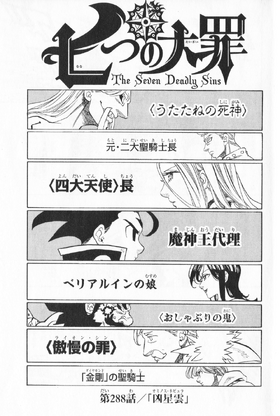 Ominous Nebula「「」, Ominosu Nebyura」 is the 288th chapter of the manga, Nanatsu no Taizai.

Escanor and Ludociel team up in order to take down Zeldris, who's used his original magic, Ominous Nebula. However, when their teamup proves to be futile, it all rests on Escanor, who has to rely on The One to stop him.

Ludociel goes over what they know about Zeldris so far: with God, he can make himself impervious to all their magic attacks and his original magic, Ominous Nebula, draws them in with great attraction before they get hit back by some unknown attack. Ludociel ponders whether it is due to the forces of darkness or an invisible killer before concluding it can't be his swordsmanship, from what he's seen so far. He then tells Escanor to follow through with the plan.

Ludociel then casts Ruby Shine, emitting a bright light that blinds Zeldris, Cusack and Chandler. Escanor then fires a Cruel Sun at the ground in front of Zeldris, causing large amounts of debris to surround him. Ludociel then jumps up, noting that if Zeldris is just waiting for them to attack in order to counterattack, in other words, if it uses the same principle as Full Counter, then all they need to do is keep him from timing his counterattack. They both then attack, only to be blown back again.

Ludociel wonders how they were attacked since the debris should've camouflaged their positions, only for them to begin getting sucked in again. As Escanor and Ludociel hold onto the ground to stop themselves, Zeldris claims this is wasting time and will begin taking this seriously, much to Ludociel's surprise. Zeldris then gets into a stance and the mark on his forehead enlargens. Merlin notices that the force of his attraction has doubled, only for her to suddenly be pulled in near Zeldris. As Merlin realises she can't teleport away in time, Zeldris reveals he will take Merlin down first so he can get the Commandment off of her.

Merlin is then blown back but it's revealed that Escanor shielded the blow for her. Merlin apologises but Escanor says he was only following his heart, only to then notice a wound on Merlin. Angered, Escanor fires Crazy Prominence from his body at random and the miniature suns hit every corner of the area, even hitting Cusack and Chandler. A part of the ceiling then falls down from the attack and seemingly hits Zeldris, only for it to be cut into multiple pieces.

This allows Merlin to deduce the true identity of Ominous Nebula: by spinning his darkness around him in a state of extreme concentration, Zeldris creates a whirlpool that draws in all living things around him; as if air was introduced to a vacuum. Everything that then enters the area around Zeldris are cut down by him so fast, it's impossible to avoid, prompting Merlin to call it by another name: Full React. Ludociel recognises that the speed surpasses his own Grace and becomes angered.

He then charges at Zeldris willingly, claiming that he has a responsibility to win the Holy War as the leader of Stigma and as the head of the Four Archangels. He then asserts, to that end, he sacrificed love and friendship before saying that a Demon could never understand. He then attacks but it doesn't work. He is about to be struck back when Gilthunder uses his Thunderbolt to get between Ludociel and Zeldris to take the hit for Margaret's body.

Hendrickson shouts out for him when Gilthunder and Ludociel are blown through a wall. Zeldris notes that only Escanor and Merlin are left before increasing the force of attraction even more. An angered Cusack yells at Escanor and Merlin to die already. Escanor then tells Merlin to hang on for one more minute. Merlin agrees and says she's done making mistakes.

She then uses Cho-renzoku Teleport to continuously teleport her and Hendrickson around so that they don't get pulled in by Ominous Nebula. Escanor then begins walking to Zeldris willingly. Cusack realises that Escanor isn't being affected by Ominous Nebula and questions if he's a monster. Escanor then recounts how he's beaten both Meliodas and Estarossa, wondering if all the brothers want to be beat by him. As Chandler questions where he's felt this magic before, Escanor declares that the time has come as he's entered The One.

Q315. Honey magic-san: Are Day and Night Escanors conscious of each other?

The Last Page of Chapter 288