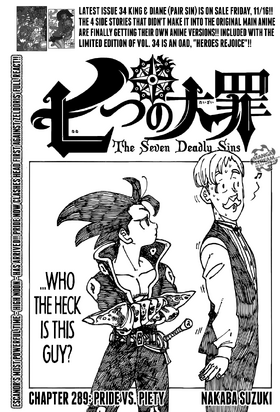 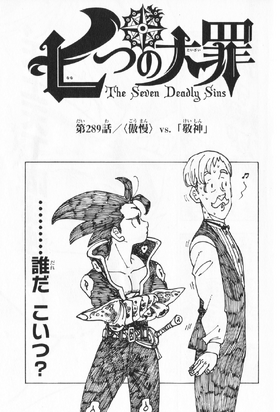 Pride vs. Piety「〈傲慢〉 ｖｓ．〈敬神〉 Gōman vs. Keishin」 is the 289th chapter of the manga, Nanatsu no Taizai.

Escanor engages Zeldris in battle in an attempt to stop his Ominous Nebula.

After activating "The One", Escanor decidedly advances towards Zeldris, whose Ominous Nebula seems to have no effect on the Lion's Sin of Pride. Escanor attacks him with Rhitta a couple of times but with no effect. Then, Escanor disposes of his weapon and uses Divine Sword Escanor on Zeldris overcoming the countering force of the demon's power. Chandler recognizes Escanor's power as the same of the Archangel Mael. Zeldris manages to push back Escanor, but with a second strike Escanor finally dispels Ominous Nebula, forcing Zeldris to block with his sword. Zeldris tries to take some distance, but Escanor strikes him in the chest nearly piercing his body using a new technique, Divine Spear Escanor. Before the Sin can give the coup de grace, Chandler saves Zeldris by using Darkness, covering the whole area in "night" and thus abruptly returning Escanor to his night form.

Zeldris would take just a couple of seconds to recover, but not so fast as to evade Ludociel's Gold Shining before he can.

Q316. Ink-san: Is Zeldris bad at cooking like Meliodas?

The Last Page of Chapter 289

Retrieved from "https://nanatsu-no-taizai.fandom.com/wiki/Chapter_289?oldid=149816"
Community content is available under CC-BY-SA unless otherwise noted.