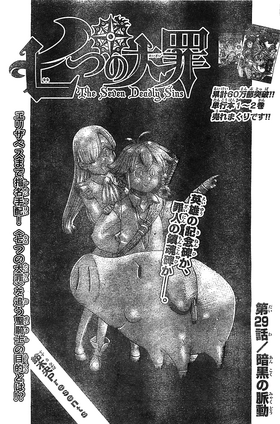 Dark Pulse「暗黒の脈動 Ankoku no Myakudō」 is the 29th chapter of the manga, Nanatsu no Taizai.

The Great Holy Knight, Dreyfus, in order to maintain troop morale, speeches the Holy Knights, revealing the reasons for Holy Knights' coup d'état. An unexpected report about the invasion of the Northern Barbarians leads Gilthunder and Howzer to be deployed to the war zone, and then defeat the invading army quickly. They return to report to Dreyfus, when they converse about the predicted Holy War, Liones's foe in it, the Seven Deadly Sins, and the New Generation of Holy Knights. Meanwhile, Hendrickson, the other Great Holy Knight, summons Jericho and Twigo, and reveals to them the corpse of a demon.

The chapter begins as the Great Holy Knight, Dreyfus, speeches the Holy Knights, in the castle of Liones. He begins, stating that the Bartra Liones's ordering of the Holy Knights to lay down their swords in order to prevent the inevitable and predicted Holy Knight was a mistake. He continues that the Holy Knights' duty was to protect Liones, instructs his subordinates to enslave and put the citizens to work, justifying this with the fact that the war is being fought for the citizens' benefit, and finally concludes his speech by promising them that the second Great Holy Knights, him and Hendrickson, will lead the kingdom to victory. After he finishes, Hendrickson comments to Dreyfus about his speech's gaudiness, to which the latter replies that due to the return of the Seven Deadly Sins, and the prediction of a Holy Way, high troop morale must always be maintained.

They are interrupted by a knight, who reports of an invasion by an army of the Northern Barbarians, that numbers about three thousand, and has annihilated the knights who attempted to resist it. He requests that the Holy Knights stop the invasion, questioning if this was the Holy War. In the battlefield, the chief of the Northern Barbarians, as he kills knights, comments that the knights are very weak, and orders his subordinates to plunder the kingdom, assuming all of its knights, including the Holy Knights, to be as weak as the ones who he massacred. Soon, the Barbarians notice a flying dragon in the sky, from which two Holy Knights, Gilthunder and Howzer, land along with a small lightning strike. The chief declares his not believing that the two of them along could defeat his army of three thousand. The entirety of the Northern Barbarians are, however, quickly defeated by the two Holy Knights, who prove to be much more powerful than the whole army.

After they return to the castle, Dreyfus commends them for their work, and after Howzer questions him if that "errand" wasn't the predicted Holy War, assures him that it wasn't, but does state his doubt. Gilthunder then expresses his suspicions of their foe, who hasn't been predicted, being the Seven Deadly Sins, since with King's betrayal, four of them have already reunited. After Howzer's reply that even though said group of knights are legendary, they are only seven knights, Dreyfus states that even so, they, especially the Dragon's Sin of Wrath, Meliodas, are a threat that must be eliminated. He then proceeds to explain to them about Meliodas, who had once lost himself in his wrath, having utterly destroyed the kingdom of Danafor, a kingdom whose strength was equal to Liones's at the time. A bewildered Howzer questions this incredible feat, and then also mentions the supposed "New Generations" of Holy Knights, with Gilthunder then reporting to Dreyfus about many Holy Knight apprentices, many of whom were considered failures, suddenly and mysteriously gaining incredibly strength, and that he senses someone of something to be the phenomenon's source. After Howzer leaves, Gilthunder goes closer to Dreyfus and informs him silently that the second Great Holy Knight, Hendrickson's, subordinates have been calling for several apprentices.

Somewhere else, Guila is shown to be taking two masked individuals to a strange location, when she stops upon an instruction from Helbram. She removes their masks, revealing them to be none other than Jericho and Twigo. The two knights question as to Hendrickson, stating that they were summoned by him. They turn back when the Great Holy Knight calls out, and are greatly shocked and frightened when he shows them the corpse of a demon, and states that they will be reborn.

Retrieved from "https://nanatsu-no-taizai.fandom.com/wiki/Chapter_29?oldid=122782"
Community content is available under CC-BY-SA unless otherwise noted.