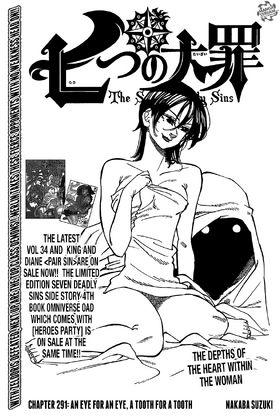 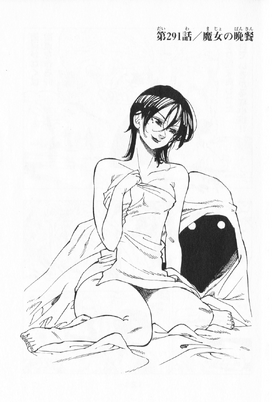 The Witch's Dinner「魔女の晩餐 Majo no Bansan」 is the 291st chapter of the manga, Nanatsu no Taizai.

Chandler and Cusack are ready to fight back Merlin, Ludociel, Gilthunder, Hendrickson and Escanor. Merlin remains confident even with Ludociel warning her about bluffing about her statement. Suddenly a bolt of lighthings and a gust of wind hit both demons for their confusion. Merlin tells them she used Double Impact a special spell that combines elements and amplify the damage of its targets, then a second "wave" weaken her opponents resistence to any power. Cusack suggest to Chandler using Absolute Cancel but before he can use it, he is hit by another bolt. Merlin further explains that she hid uncountable wind and lightning magic who react to their movements, and thanks to Infinity, her spells will not be undone until both of them are finally dead.

A disgusted and shocked Ludociel thinks for himself he should never be at odds with Merlin as Escanor asks Merlin when she thought about her strategy, to which Merlin resplies when she used teleportation to escape Ominous Nebula.

Hendrickson notes Gilthunder's wounds are worse so he asks to Ludociel to use his healing magic in order to save him. However Ludociel replies that Gilthunder did not protect him but Margaret's body and claims he needs all the magic power for the battle.

A desperate Cusack uses Resonant on Merlin successfully entering her mind where he can see her in her true appareance and in order to undone her spells and defeat her in the same way he did with Arthur. However, as he tries to break her will, Merlin punches him to his surprise. She explains him thanks to Supreme Deity's blessing she is able to protect herself and her mind of demons powers so she threats Cusack of his and demons' inminent defeat and promises him to avenge Arthur.

A wounded Zeldris uses what is left of his strength and destroys all of Merlin's spells to Ludociel and Merlin's surprise and claims as long he has the Demon King's power he will not have anything to fear. Zeldris wobles a bit, giving Ludociel the chance to slash Zeldris and defeat him. With the three demons defeated, he states he won the Holy War and shouts he finally got to avenge his little brother's death.

However, at that moment, Gowther's memory broken spell, giving everyone back their original memories, potentially changing the course of Camelot's battle.

Q318. Nekotomo-san (From Kagawa Prefecture): How much of a family do Merlin and her father feel?

Nakaba: They're both observation subjects. There's not a speck of father-daughter love between them.

The Last Page of Chapter 291

Retrieved from "https://nanatsu-no-taizai.fandom.com/wiki/Chapter_291?oldid=149819"
Community content is available under CC-BY-SA unless otherwise noted.