That "Some Day" is Now 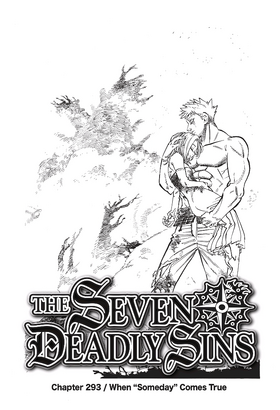 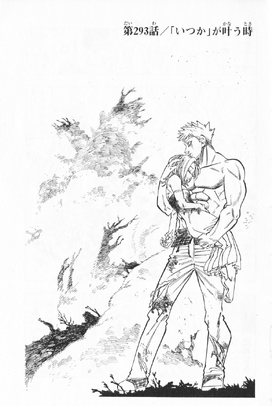 That "Some Day" is Now「「いつか」が叶う時, "Itsuka" ga Kanau Toki」 is the 293rd chapter of the manga, Nanatsu no Taizai.

Ban finally returns from Purgatory ready to help the Seven Deadly Sins as he eventually reunites with Elaine to fulfill his precious promise to her: "steal" her away to live together.

Shortly after returning from Purgatory, Ban is questioned by Elizabeth about Meliodas whereabouts and if he did make it back safely. He clarifies she should not worry about it as he will surely come back for her. He gaze at Camelot and tells to his allies to go where Meliodas' body is, before heading somewhere else as he needs to take care of something first.

At Liones' front most of Holy Knights keep fighting against demons. Among their allies are giants abd fairies, including Matrona and Gerheade. Elaine also particpates and saves Howzer from a demon attack. An Orange Demon punches her, so Gerheade grabs it with vines and tells her she should be resting because her body is not in conditions to resits the current battle.

Matrona tries to defeat some demons with her attack Daichi no Kiba but she is pushed away by an explosion. Elaine then uses Tempest Falls that creates powefull wind columms to protect everyone. Elaine tells Gerheade that Ban is at Purgatory doing his best to help Meliodas and as the Fairy King's Forest Holy Maiden she has a duty of fighting, otherwise she would have not the strength to face him.

Elaine's wings fade away as a result of her magic exhaustion and falls as she thinks how she wanted to see Ban's face even for a last time. Ban then saves her by slashing all the demons what were about to attack her. She is glad to reunite with him and being in his arms, she eventually dies as the rest of fairies mourn her. Ban tells them is not over yet and uses Gift for Gerheade surprise. She notes that the power of the Fountain of Youth could bring her back, but warns him if he keep using it he will no longer being immortal anymore.

Once Elaine awakens, tearfully wonders if Ban is okay by being mortal again, he replies he does not care as long he can fulfil his long time promise: to "steal" her away all by himself. They both embrace together happily and laugh now that their "some day" finally is happening.

Q320. Yui-san (From Saitama Prefecture): Suzuki-sensei, which point are you most fixated on drawing?

Nakaba: The scene I want to show the most in its chapter... I guess.

The Last Page of Chapter 293