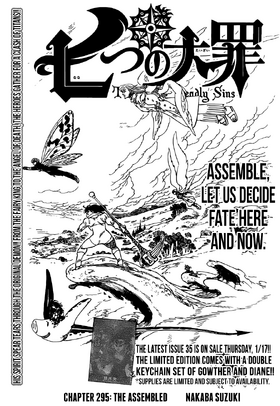 The Gathered「集結するものたち Shūketsu suru Mono-tachi」 is the 295th chapter of the manga, Nanatsu no Taizai.

King's first form Chastiefol impacts the Original Demon head on. As King and the others approach Camelot, the Commandments reunite with the other five inside Meliodas' cocoon.

As King's Chastiefol hits the Original Demon, Merlin notes that King must be far away and that he has undergone impressive growth to control the spear from a distance. Meanwhile, Zeldris also senses the remaining members of the Seven Deadly Sins coming and seems to also sense something else.

King realises he has to end it quick since controlling the Spirit Spear takes up too much magic. The Original Demon breaks up the spear but King shifts it to its fourth form, Sunflower and causes a huge explosion. Merlin says that the attack is great while Escanor calls King an impudent, cheeky brat.

Hendrickson and Gilthunder look from afar and notice that the battle is getting fierce and that they will soon get pulled into it. Hendrickson tells Gilthunder to run away though he won't since he refuses to leave Margaret. Rueduciel, in Margaret's body, gets up and asks Hendrickson to take him to see Mael. Ludoshel has trouble trying to fly due to the shock and he even says that he doesn't mind if Hendrickson laughs at him for being so pathetic.

Hendrickson calls Ludociel a poor thing, feeling sorry for him when Hendrickson suddenly used Purge. Margaret then fainted and Gilthunder saw that Ludociel had been driven out of Margaret's body as he sees Ludociel in his true form.

Hendrickson reveals that he's been waiting for the moment for when Ludociel drops his guard so that he could get him out of Margaret's body. He tells Gilthunder to go, reminding the knight of Zaratras's last words. Gilthunder grabs the unconscious Margaret and flees.

Ludociel is angered that Hendrickson tricked him and Hendrickson offers to let Ludociel use his body as a vessel, saying goodbye to Dreyfus.

Zeldris continues to fight King. He is countering King's spear in its Increase form and tells him to stop his futile resistance as he can't win. King suddenly changes his True Spirit Spear Chastiefol into its Guardian form which lands hits on Zeldris, with King asking if Zeldris still thinks that this is a futile resistance.

Zeldris smirks and says that the Seven Deadly Sins should realize by now that they're not the only ones coming to Camelot. King is confused when Diane and Elizabeth feel a strange presence ahead of them, going to Camelot.

Mael then figures it out: Zeldris knew that Mael, as Estarossa, would've gathered the remaining commandments, tried to absorb them and not be able to handle it. So the strange presence was the four Commandments that left Mael's body.

He goes on to say that the Commandments are fragments of a demon's power, the more gathered they are, the more self-awareness they attain. They are now headed to a place where there are others like them. In other words, they are headed to the coccon Meliodas is in.

Elizabeth asks if there is any way to stop them but when Mael says no, she realizes that this could mean Meliodas could succeed in becoming the Demon King. Diane tries to cheer her up, saying that since Merlin has Melascula's Faith Commandment, Meliodas can't fully become the Demon King though Mael replies that it's probably too late.

Back at Camelot, the test tube that Melascula was in starts to come out and Merlin notes that the commandment is resonating with something. Suddenly, the tube breaks and the Faith Commandment exits Melascula's body as the four commandments arrive at Camelot.

Zeldris says that they're finally here and tells Gelda that it won't be long now. Elizabeth tells Meliodas that he cannot become the Demon King as the rest of the commandments prepare to enter the cocoon.

Q322. Yageta Yuusuke (From Tochigi Prefecture): What will be your Christmas present (to yourself), Baccho-sensei?

Nakaba: "Dragon Quest Builders 2" that my wife will offer me.

(Editors' note: It wasn't Christmas yet when the question was asked.)

Retrieved from "https://nanatsu-no-taizai.fandom.com/wiki/Chapter_295?oldid=125125"
Community content is available under CC-BY-SA unless otherwise noted.