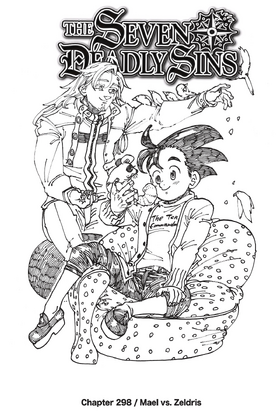 Mael vs. Zeldris「マエルvs.ゼルドリス Maeru vs. Zerudorisu」 is the 298th chapter of the manga, Nanatsu no Taizai.

Mael begins to fight Zeldris as the clock ticks down until Merlin can activate her Chrono Coffin to suspend time within Meliodas' cocoon.

Ludociel rejoices that Mael is alive but Zeldris then says that if Mael awoke, he should have gone back to the Celestial Realm. Mael says that the fact that the Holy War was dragged on was partly his fault but he did not come to fight. He tells Zeldris that if he gets the Demon Army to retreat and does not get in the way of stopping Meliodas, then Mael would not fight.

Escanor is impressed to witness the power of Sunshine by its original owner.

Zeldris protected himself from the blast using God and asks Mael if that was supposed to scare him, reminding the goddess that even the strongest magical attack does not work on him. Mael says he knows and Zeldris then says that this is his response as he launches a darkness attack at Merlin. Ludociel uses an Ark to stop it but it splits apart and tries to go after Merlin again. But the Seven Deadly Sins all block the attack, stating that this was their will and their resolve. Elizabeth asks Merlin how long is left. She answers five minutes.

Mael flies towards Zeldris, grabs him and spins him around before throwing him to the ground. Zeldris lands and activates Ominous Nebula. Everyone starts to get sucked in and Mael gets too close. But then Zeldris' sword melted and his Ominous Nebula is disabled. Escanor then realizes the explosive power of Sunshine also seeps into the body so it is keeping Ominous Nebula at bay. Mael says that if he could defeat Zeldris in five minutes, he wins. Alternatively, if Zeldris can beat Mael in five minutes, he wins.

They keep exchange blows until Mael get to damage Zeldris.

Q325. missa-san (From Yamaguchi Prefecture): Does the strength of the Goddess Clan change when they're possessing a human versus when they're not?

Nakaba: Depending on the compatibility their strength changes but fundamentally, of course, their original form is stronger.

Retrieved from "https://nanatsu-no-taizai.fandom.com/wiki/Chapter_298?oldid=125417"
Community content is available under CC-BY-SA unless otherwise noted.