Everything Will be Frozen 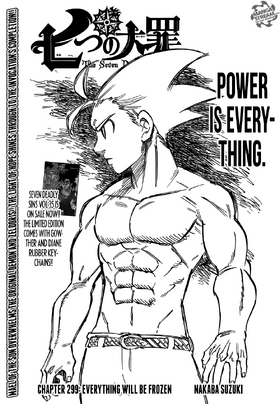 Everything Will be Frozen「すべてが凍り付く Subete ga Kooritsuku」 is the 299th chapter of the manga, Nanatsu no Taizai.

As Zeldris is punched back, Hendrickson asks everyone if they are alright though Escanor says they should be asking Hendrickson that.

Mael try to appeal to Zeldris telling that although they may have been fake memories, they were both brothers at some point and that they should be able to talk things out. Zeldris scoffs at this, saying that if Estarossa heard what Mael said, he would have laughed. Zeldris makes a blade out of darkness to replace the sword blade while Mael creates Ark spinning disks around his hands.

They engage in a fierce battle, while Merlin announces that she needs two more minutes. Mael injures Zeldris further and notices that Zeldris is not acting as calm as he would be. He asks if Zeldris really wants to win the Holy War that badly to the point where he would allow Meliodas to become the Demon King. Zeldris tells Mael that he can say whatever he wants, as Zeldris appears behind Mael. He says that Meliodas was the one who wanted this and attacks Mael, pushing him back. Mael sees that something is driving Zeldris to the point where he is desperate. Zeldris yells for Mael to stay out of their way as he slices Mael across his upper body.

Merlin needs one more minute to activate her spell which forces Zeldris to unleash a flurry of attacks using his darkness. But King activates his Chastiefol Eighth Form, Pollen Garden and tells Zeldris to give it up, though King is also nearing his limit. Zeldris yells out in frustration and tries to break the barrier. Mael states that it is unfortunate that something is driving Zeldris this way and attacks him from the back. Zeldris crashes into the ground, still standing. He remembers Meliodas' promise: he will revive Gelda as soon as he gathers all the Commandments and becomes the Demon King.

Merlin thanks everyone for their effort and finally finishes chanting Chrono Coffin and successfully suspends time within the cocoon. Hawk wonders if it worked. Hendrickson points out that a bird near the cocoon is frozen in midair along with some rubble.

Exhausted, Zeldris thinks of Gelda as he falls down to the ground.

The Seven Deadly Sins all cheer that the Holy War has ended and Ludociel is extremely happy to meet Mael after all these long years. Hawk transforms into his Tyrant Dragon form and flies up to the cocoon, saying to Meliodas that has to wake up after everything everyone has done for him, mentioning that Elizabeth has only one more day until her curse activates. However, Elizabeth only wishes for Meliodas to be safe. Hawk then notices that there is a hole in the cocoon, revealing that it is empty.

Then, everyone feels a massive dark power and Elizabeth can feel someone behind her. She asks if that is Meliodas, while Zeldris laughs. He tells a grown-up looking Meliodas that he better keep his promise, addressing him as the Demon King.

Q326. Lambda-san (From Kumamoto Prefecture): Have you ever thought of wanting to participate in any voice acting?

Nakaba: Amateurs shouldn't try to join in on professional work!!... Either way, I'd never be able to do it!!

Retrieved from "https://nanatsu-no-taizai.fandom.com/wiki/Chapter_299?oldid=125129"
Community content is available under CC-BY-SA unless otherwise noted.