What One Must Do 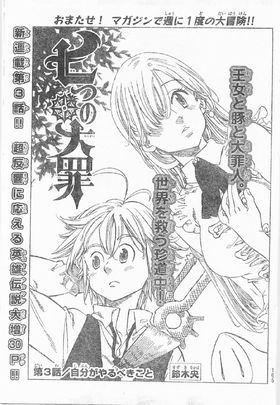 2
What One Must Do「自分がやるべきこと, Jibun ga Yarubeki Koto」 is the 3rd chapter of the manga Nanatsu no Taizai.

Whilst a celebration is held in Boar Hat, and Meliodas is hailed as a savior by Bernia's villagers, Gilthunder, wanting to confirm if the removal of his sword was not an accident, throws a spear imbued with his power toward the town. Meliodas, however, easily stopped and throws the spear back, destroying Fort Solgales.

The Boar Hat host a party to celebrate the revival of Bernia's river, as Elizabeth attempts and struggles being a waitress for the first time, while trying to find information about the Seven Deadly Sins or the Holy Knights.

Meanwhile, Gilthunder, having been informed that his sword had been removed by a child and intending to confirm whether it was an accident, asks for the approximation of the location, borrows a spear from a soldier, imbues it with his lightning magic, and throws it toward Bernia. Meliodas instantly notices it, and goes out in the pretense of wanting to go to the bathroom, as Elizabeth, who had been making several mistakes while being a waitress, runs out crying.

As Meliodas tries to approximate the direction the spear was heading from, Elizabeth laments her uselessness as a waitress, saying that it was laughable for her to want to save the kingdom. Hearing that, Meliodas tries and manages to console her by saying that even if she was weak, she had the determination to save the people and that if she had not come to his bar, she would have never found him. With Elizabeth now encouraged, Meliodas then stops Gilthunder's spear, creating a crater, and destroying several houses due to its momentum, and throws it back toward Fort Solgales, where Gilthunder resides.

Back in the fort, as the Holy Knight is ordering one of his subordinates to increase the supply of laborers, the spear that was thrown back hits its target, causing the fort to be destroyed and Gilthunder to realize that the Seven Deadly Sins were still alive. The next day, after acknowledging that they could bring more danger to Bernia if they remain there, Meliodas, Elizabeth and Hawk continue their journey to search for the Seven Deadly Sins.