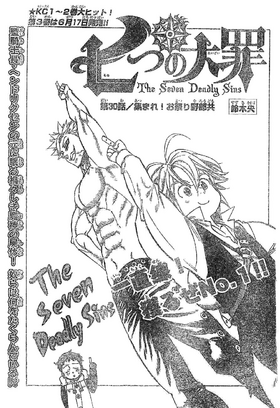 Hendrickson explains that the corpse of the demon was found in the Fairy King's Forest, and also about the power enhancing qualities of its blood. Though hesitant at first, the two apprentices drink the creature's blood. Twigo explodes due to being incompatible to it, while Jericho survives, and becomes part of the New Generation of Holy Knights. Meanwhile, Meliodas and the rest arrive at Vaizel, him speculating of a sacred treasure being one of the items sold in the town's annual flea market. Upon being directed to a battling tournament, Meliodas and Ban readily enroll themselves, and King, who unwittingly joins them. The tournament's participants are shown to also include Howzer. The participants then make their way on top of a giant rock, where the preliminary is declared to begin.

Hendrickson explains to Jericho and Twigo that the monster in front of them was the corpse of a demon that was found twenty years ago in the Fairy King's Forest. The two apprentices question the existence of demons, to which he replies, confirming their existence, and not being merely objects of folklores. He also informs them that the demon's killer, and the reason the creature exists, is unknown, the latter being since Demons Clan should have been sealed for eternity by the Holy Maiden Clan after an ancient war. When the both respond that they haven't come here for being explained to about something like this, and that he had told them that they would receive new powers, Hendrickson cuts the corpse and collects some of the spurting blood, asking them to drink it. He proceeds to reveal to the two about there having been several hundred dead crows around the corpse when it was first discovered, and that one of the ones that was still alive, suddenly transformed into a powerful monster. He explains that the blood and flesh of the demon appear to have power-enhancing qualities, and that if a human who consumes them is compatible to them, their powers will be greatly increased, then citing Guila as an example.

Though hesitant at first, Jericho and Twigo, upon remembering their humiliations at the hands of Ban and Meliodas respectively, drink the blood, the effects of which causes them great pain. The former collapses, while the latter comments on his increasing power. As Helbram and Hendrickson comment that one is compatible, however, Twigo's body bloats grotesquely, and then explodes. Jericho, on the other hand, survives the ordeal, and is then welcomed by Guila to their side.

Meanwhile, near the merchant town of Vaizel, Meliodas explains to the others about the town hosting an annual flea market, the diversity of the items sold there, and about his speculations that a weapon known for being unusable is a sacred treasure. As the group walks towards the town, Diane throws a tantrum at not being able to enter the town; Meliodas justifies it with her being very noticeable due to her size, but secretly reveals that giants are disallowed entry into Vaizel due to having made a "huge ruckus" a few years ago. King's offers to accompany Diane go unheard, with Elizabeth, after offering to join Diane, and the giant heading to the forest to gather ingredients, and Meliodas, Ban, King and Hawk heading to Vaizel. As the four walk through the heavily crowded town, and comment that the crowd makes searching for the weapon difficult, an alcoholic, elderly man, upon hearing their target, directs them to the annual Fight Festival of Vaizel, in which weapons are disallowed. King scorns at the savagery of the tournament, and is bewildered when Ban and Meliodas, instead, expresses their extreme eagerness to enter in the tournament, and battle each other.

The awards for winning are then revealed: a hundred gold coins, and as a bonus, a giant's war hammer that weighs 2200 pounds, and King immediately recognizes as Diane's sacred treasure, Gideon. As Meliodas pulls the unwitting King into enrolling, Taizoo, a three time champion, lifts the former by the collar, and in turn, the latter, commending the two to leave, since he believes that normal children entering the tournament will decrease its level. Another competitor, however, easily lowers Taizoo's huge, muscular arm, commenting that age didn't matter in a festival, and as he is revealed to be Howzer, a Holy Knight, that he had wanted to join the tournament every year, only for his job to restrict him. King mentally states that he has seen the man somewhere, Ban reveals that he has enrolled King also, much to the Sin's dismay. Not long after, the participants, who include a mysteriously, young girl, are requested to gather at the fighting rink on top of the giant rock. As Hawk sells ale at the rate of one cup per silver coin in the audience, the preliminary of the Fight Festival is declared to begin.