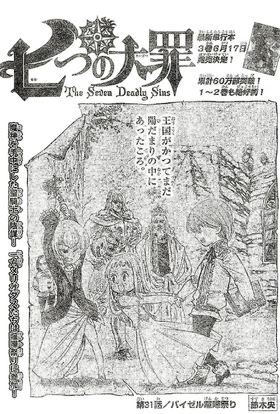 The Vaizel Fighting Festival「バイゼル喧嘩祭り Baizeru Kenka Matsuri」 is the 31st chapter of Nanatsu no Taizai.

The preliminary round of the Vaizel Fight Festival begins with the referee, Love Helm, announcing the rules. A handful of contestants, including Taizoo, Ban, Meliodas, and a young girl, easily overpower the others. After the preliminary ends, eight contestants advance to the main tournament; King manages to also advance by using his levitation powers. Not long after the drawing of lots to decide the match-ups for the main tournament, the first battle of the first round begins with Matrona, the aforementioned young girl, and Griamore facing off. Just before the battle begins, Matrona removes her cloak, unveiling her identicalness to Elizabeth.

As the audience cheers, Hawk continues his selling of ale. In the ring, Meliodas and Ban agree on not unleashing their full strength. King opposes the Sins' entering in the tournament, since Diane would be angered by it. When Meliodas replies that winning Gideon for Diane would make her happy, however, King fantasizes of Diane thanking him in a cute way, which makes him very determined to win the tournament. Soon, the referee of the Fight Festival, Love Helm, announces the rules: pushing opponents out of the ring will defeat them, the final eight participants will advance, and any and all forms of battling is allowed, as long as it is barehanded.

Immediately as Love Helm declares the beginning, all participants begin brawling, trying to push each other out of the ring. Only a handful of fighters stand out above the others, easily overpowering them. These are shown to include Taizoo, Howzer, Ban, etc. As the frightened King continues to evade rather than fight, Ban, while defeating fighters and expressing his boredom, come across a fighter who is especially proud of his speed. With an even greater speed, he quickly replaces the apron that he has been using as a substitute for the shirt that was torn in the Capital of the Dead, with the man's shirt, which has caught his attention. Meanwhile, the young girl who was seen earlier, displays her great strength and speed when she, with great ease, defeats more than ten fighters; King is accidentally caught among the fighters she has pushed outside, and seemingly loses. As only seven contestants remain, the audience wonders as to the main tournament, which requires eight; King is then shown to have used his levitation abilities to not be literally pushed out of the ring. Though the other defeated competitors request that he be disqualified as well, Love Helm refuses, since he he didn't use a weapon, but does call his method of winning, cheap. Ban and Meliodas also tease King for having won in a very cheap manner, much to his dismay.

The contestants are requested to come to the waiting room, where they draw lots to determine the match-ups for the first round of the main tournament. The first battle is assigned to be between Matrona and the Griamore, who is currently unarmored. The second fight is between Howzer and Taizoo, with the mentioning of Howzer's name leading King to realize the man's identity as a Holy Knight. The third battle is revealed to be between Cain, the elderly drunk man who had lead Meliodas and the others to the tournament, and King, whom Ban had entered under the name, "Old Fart", much to his irritation. Finally, the last fight is among the remaining two contestants, Ban and Meliodas, whom the former has entered under the names, "Baan" and "Meliodafu". This causes Howzer to almost recognize both of them from their physical traits, but dismiss them as the Deadly Sins because of their obvious aliases, due to his naivety. As the first battle begins, Veronica is seen standing among the audience and commenting that the Seven Deadly Sins have fallen for the trap. Matrona is then asked by Love Helm to remove the cape she had been wearing, which reveals her identicalness to Elizabeth.

Last Page
Add a photo to this gallery

Retrieved from "https://nanatsu-no-taizai.fandom.com/wiki/Chapter_31?oldid=122843"
Community content is available under CC-BY-SA unless otherwise noted.