The Lineup of Strong Men 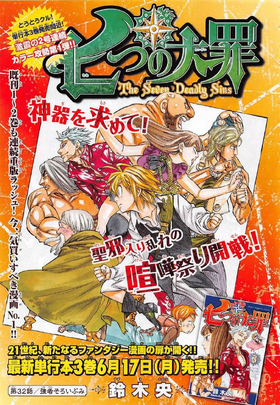 The Lineup of Strong Men「強者そろいぶみ, Tsuwamono Soroibumi」 is the 32nd chapter of Nanatsu no Taizai.

As the battle begins, everyone ponders on Matrona's identity, and she delivers a barrage of attacks, which are all rendered ineffective by Griamore's ability. He uses his barrier' expansion to push Matrona off the ring, and then renews his vow to protect Veronica at all costs. When he declares that he will humiliate Meliodas next, however, Matrona, now enraged, quickly destroys his ability, and then him, with a single punch. Victorious, Matrona skips towards Meliodas, believing her identity to have been discovered, but is greeted by Meliodas' question as to the same. Infuriated, She punches him and leaves, and replies in a surprising manner when King questions her about Diane and Elizabeth.

Love Helm comments on the contenders in the ring, while Veronica, King, and Meliodas ponder whether Matrona is Elizabeth due to Matrona's incredibly identicalness to the princess. When Veronica asks him to stop, however, Griamore, replying that the moves Matrona had displayed in the preliminary were impossible for a frail lady like Elizabeth, readies himself. His opponent, just as the battle begins, immediately and with great speed, attacks relentlessly. The punches are, however, rendered ineffective by the Holy Knight's ability, "Wall", and creates a circular, and defensive magic barrier, which cannot be affected by physical attacks or ordinary magic, around himself. Griamore states his intentions of merely pushing Diane out of the ring with his barrier's omnidirectional expansion, and, glaring at Meliodas, mentally declares his desire to defeat Meliodas, since the Sin of Wrath has disgraced him and caused him to disappoint Veronica, something Griamore considers to be absolutely not allowable.

He then remembers an episode of the past, when he was acting as a horse to a much younger Veronica. Noticing her crying, he questions her the reason, with her revealing that she had overheard her father and Zaratras discussing about Elizabeth not being her biological sister, but adopted, and to be originally from the kingdom of Danafor. When he asks her as to what Gilthunder and Howzer had told her about this matter, she tells him that she hadn't told them, as Gilthunder was guarding her sister, and Howzer is not able to keep a secret, and also that since he always obeys her orders, and wouldn't not disclose this information to anyone if she ordered so, which shocks him. In the present, as Matrona is struggling with his ability, Griamore reveals that it is a physical manifestation of his conviction to protect Veronica at all costs, and declares Meliodas will be humiliated by him next. This appears to enrage Matrona, who, refusing to let that happen, destroys the barrier with a powerful punch, and then, with the attack, punches the much larger Griamore in the neck, sending him flying out of the ring. This greatly shocks both Veronica and Howzer, and causes Matrona's hat to fall off.

As the lady is declared to be the winner of the first battle of the first round, her facial appearance is now revealed to be identical to Diane's. She skips toward Meliodas, Ban and King, stating that she had wanted to keep it as a secret for a while longer, but is only greeted with Meliodas's question as to her identity. His dullness having angered her, Matrona punches him in the stomach and storms off, turning back when King chases after her, and asks her about her body became much smaller, and about where Elizabeth is. In response to the last question, Matrona replies that "she" is right there, with an expression of Elizabeth's.