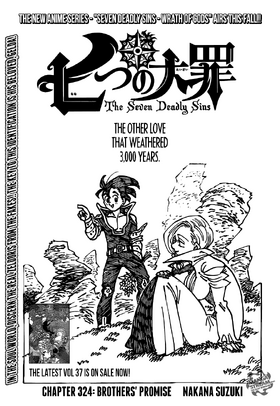 Brothers' Promise「兄弟の約束 Kyōdai no Yakusoku」 is the 324th chapter of the manga, Nanatsu no Taizai.

Gelda, Zeldris' lover, quickly identifies the real one from all the fakes. Meliodas eliminates all of the Zeldris's clones, causing his own expulsion from the spirit world. Zeldris readies to battle his father.

Meliodas and Zeldris are surprised to see Gelda in the spirit world. Gelda quickly identifies the real Zeldris. Upon being asked by Meliodas how she did it so easily, she replies by saying how Meliodas could do it if it was Elizabeth. Then the fake Zeldris start attacking Gelda and Meliodas saves her. Leaving the moral support for Zeldris to Gelda, Meliodas says he wants to do at least one brotherly thing and goes on to defeating all the fakes. Meliodas gets expelled just as Zeldris calls out to his brother. The Demon King appears and Zeldris gets ready to fight him.

Q350. Mayama-san (From Iwate Prefecture): Besides manga, what other magazines do you read?

The Last Page of Chapter 324

Retrieved from "https://nanatsu-no-taizai.fandom.com/wiki/Chapter_324?oldid=149856"
Community content is available under CC-BY-SA unless otherwise noted.