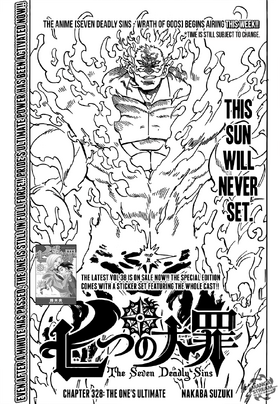 The One Ultimate「 Za Wan Arutimetto」 is the 328th chapter of the manga, Nanatsu no Taizai.

Escanor uses The One: Ultimate to continue fighting the Demon King. To his annoyance the other members of the Seven Deadly Sins decide to help him in the fight, though after some words from Meliodas he accepts their help and the sins commence a joint attack on the Demon King once more.

Q368. Estaking-san (From Hokkaido): For the opposite of "The One", the minute at midnight, are there any changes that happen to Escanor?

Nakaba: He becomes the weakest... rather... I guess he's already the weakest all night long.

Retrieved from "https://nanatsu-no-taizai.fandom.com/wiki/Chapter_328?oldid=136763"
Community content is available under CC-BY-SA unless otherwise noted.