Zeldris vs. The Demon King 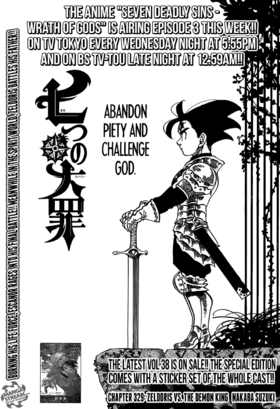 Zeldris vs. The Demon King「ゼルドリスvs.魔神王 Zerudorisu vs. Majin-Ō」 is the 329th chapter of the manga, Nanatsu no Taizai.

Inside Zeldris' mind, the Demon King shows him a fake vision of Meliodas to try and sway him to his side, however Zeldris sees through the illusion and attacks the Demon King after being supported by Gelda. At the same time the Seven Deadly Sins are gaining ground against the Demon King in the physical world and as Zeldris deals a final blow to him in the mental world the sins damage him enough in the physical one to force the Commandments out of Zeldris' body.

Q369. Ammonite-san (From Miura Prefecture): Has Gelda acted that way towards Zeldris ever since they met?

The Last Page of Chapter 329

Retrieved from "https://nanatsu-no-taizai.fandom.com/wiki/Chapter_329?oldid=149861"
Community content is available under CC-BY-SA unless otherwise noted.