Signs of a Great Chaos 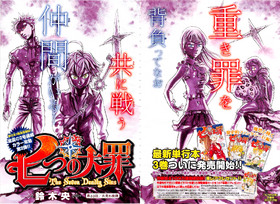 A shrunken Elizabeth appears from Matrona's bosom, the latter, revealed to be Diane, explains how the both shrunk. Meanwhile, in the battle between Taizoo and Howzer, the latter dominates the former, and finally using his powers to win with ease. Immediately afterwards, King, under the alias of Old Fart, battles Cain, only to be easily defeated even after using his ability, "Disaster". Meanwhile, Howzer discovers that Meliodafu and Baan are, in fact, the Deadly Sins, as he had suspected before. Finally, the final match of the first round is declared as between Meliodas and Ban.

A seemingly shrunk Elizabeth, who has been hiding between Matrona's bosom, replies to King's question in the previous chapter, surprising him. Matrona, or Diane, explains that, after Meliodas and the others had left for Vaizel, she and Elizabeth had headed into the forest for gathering ingredients for dinner. Inside, the princess found a strange creature, which, when Diane tried to grab it, shrunk both of them. Diane has borrowed Elizabeth's clothes, and is also wearing the princess' jewelry. Hearing the strange effects of the creature, King theorizes it to be a Chicken-Matango. Meliodas questions Diane as to why she hadn't informed them of this before, she, jumping toward him, merrily states that she had wanted to surprise them, and, as she is held by the unwilling young man, states that she had always wanted to be held by him in this manner.

She then immediately asks him to put her down, and then to grope her all over the body, the same as how he often gropes Elizabeth, much to King's temporary relief and subsequent nosebleed. When Meliodas refuses to do so, she becomes upset, and then states that since she is usually huge, her captain doesn't care about her. In response to her upset, he pats her on the head, comforts her, and explains that he couldn't act that way to an individual as important as her, to which she blushes, and Elizabeth appears dejected. To Meliodas' annoyance, however, she then immediately huge him, while merrily declaring that they could now have children together; her hug buries his face into her chest, where Elizabeth tries to hide inside Diane's clothes.

Ban then informs King that his battle will begin soon, and finding him to be nosebleeding severely, asks him whether he is dead. Soon after, during Howzer and Taizoo's battle, Ban informs the others, who had not been paying attention to the battle, that Taizoo is losing heavily but continuing to fight due to his ego, despite his opponent now having used even a tiny bit of his power, knowing that if he uses too much of it, he would kill Taizoo. Howzer is then shown to be requesting Taizoo to surrender, which he adds, is for his opponent's own benefit. When the man continues to fight and not give up, Howzer, as he uses his abilities to create what seems to be a small tornado, states that while he does not want to use his abilities on an ordinary person, unlike Griamore, letting the battle continue any more would be bad for Taizoo. When he then charges, Howzer, using his abilities to create what appears to be a small tornado around his arms, sends the former mountain bandit flying out of the ring with a punch that is strengthened by said ability, earning Ban and Meliodas' compliments.

Soon, Love Helm announces the next battle to be between Cain and "Old Fart", the name Ban had entered King into the tournament with. King hands Meliodas his sacred treasure, and then hesitantly enters the ring; a cheer from Diane, however, immediately encourages him. As the commentator speculates on the power both King and Cain might be hiding, both having not participated actively in the preliminaries, Howzer is shown to be walking toward and greeting the injured Griamore and Veronica, and questioning them for the reason they had come to the tournament. As the fight begins, Meliodas comments to Diane that King's method of fighting barehanded was "incredible", and King mentally dedicates his victory to the giant. However, both his and his opponents' physical capabilities are shown to be very low, when King, imagining himself to be moving toward Cain instantly and punching him in the face, merely jogs toward him, and waves his hand in the air, having not reached his opponent before launching his punch, much to the audience's disappointment. Cain, as a response, readies a punch, but instead merely knocks King on the head, an "attack", King comments, to have been very strong. To this, Meliodas adds upon his earlier comment, saying that King had even once lost to his cat.

When King then starts using his ability, "Disaster", Cain, immediately alarmed, punches the Deadly Sin out of the ring, stating that he was so surprised, he lost control of himself, as King expresses his upset at losing, and states that he had used his ability to trigger Cain's rheumatism. Love Helm, finally, announces the final battle of the first round, Meliodafu vs. Baan. The referee, noticing Meliodas' sword, stops him, and reminds him of no weapons being allowed, but upon being told that the sword was broken and was only decorative, allows its use. Meanwhile, Howzer is informed by Griamore and Veronica that the young man he had met, and suspected to be Meliodas previously, was, in fact, the Deadly Sin himself, much to the Holy Knight's surprise. Meliodas and Ban then ready themselves for their battle.