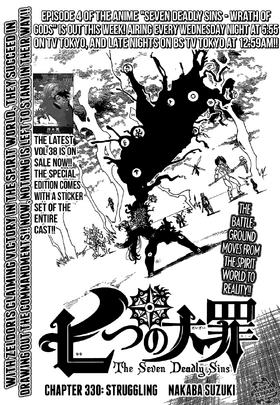 The Struggle「あがき Agaki」 is the 330th chapter of the manga, Nanatsu no Taizai.

The Commandments are released from Zeldris and infuse themselves into the land of Britannia, turning the land itself into the Demon King's vessel. However the Seven Deadly Sins are undeterred and prepare to take down the Demon King once and for all.

Nakaba: I have various in mind, but I'd say Chapter 224. Since it was a story that was decided from the first chapter of the series, I was relieved to finally draw it.

The Last Page of Chapter 330

Retrieved from "https://nanatsu-no-taizai.fandom.com/wiki/Chapter_330?oldid=149863"
Community content is available under CC-BY-SA unless otherwise noted.