This World Isn't Big Enough for the Both of Us 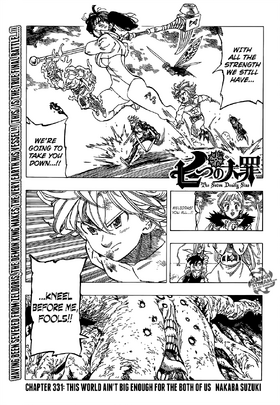 This World Isn't Big Enough for the Both of Us「倶に天を戴かず Tomo ni Ten wo Itadakazu」 is the 331st chapter of the manga, Nanatsu no Taizai.

The Seven Deadly Sins charge at the Demon King. They are left unable to move by his attack until Merlin breaks them free by breaking their limits, allowing them to launch a combined attack. The Demon King scoffs at this, planning to use The Ruler to nullify it, only for Merlin to reveal that Gowther had stopped it. Meliodas uses Full Counter in order to amplify the power of the attack and launches it at the Demon King, destroying him. Before he disappears, the Demon King appears to Meliodas in his mind and the two confirm that the cycle will not end here.

Q371. Seijoshi-san: Which is the most troublesome character to draw?

Nakaba: The Demon King!! Any version of him!!

The Last Page of Chapter 331

Retrieved from "https://nanatsu-no-taizai.fandom.com/wiki/Chapter_331?oldid=149864"
Community content is available under CC-BY-SA unless otherwise noted.