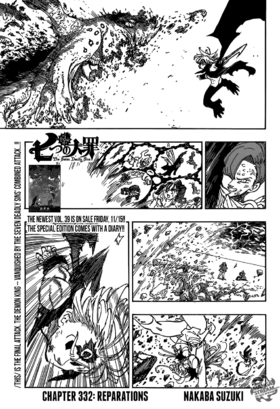 Reparations「代償 Daishō」 is the 332nd chapter of the manga, Nanatsu no Taizai.

With the Demon King defeated, the Seven Deadly Sins and their allies avoid the rubble from his destruction and land safely. Zeldris asks how Meliodas avoided destroying Britannia and Meliodas explains it was because of Lake Salisbury. Meliodas uses his Demon King power to destroy the Commandments, and then he and Zeldris begin to act like brothers once again.

Q372. Sato-otoko-san: Among all the Elizabeths so far, were there any that died without ever getting their memories back?

Nakaba: I actually wrote something like that for the anime that's currently airing! Look forward to it!

Retrieved from "https://nanatsu-no-taizai.fandom.com/wiki/Chapter_332?oldid=136768"
Community content is available under CC-BY-SA unless otherwise noted.