What the Witch was Always After 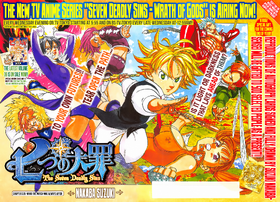 What the Witch was Always After「魔女が求め続けたもの Majo ga Motometsuzuketa Mono」 is the 335th chapter of the manga, Nanatsu no Taizai.

The Seven Deadly Sins discuss Merlin's burns from Escanor, with Merlin revealing she will keep them. Merlin transports them to Lake Salisbury where she has Arthur's body merge with the lake and Excalibur - resurrection him and turning him into the King of Chaos.

Nakaba: It's not so much that he doesn't, but the only ones that really use kicks at all are Meliodas and Ban.

Q376. Kamaboko-san (From Kyoto): Did the Four Archangels that disintegrated die? Or do they just rest in the Celestial Realm?

Nakaba: In truth, they aren't dead. As long as they have a Grace with them, they will eventually revive though it takes some time.

The Last Page of Chapter 335

Retrieved from "https://nanatsu-no-taizai.fandom.com/wiki/Chapter_335?oldid=149868"
Community content is available under CC-BY-SA unless otherwise noted.