The King of Chaos 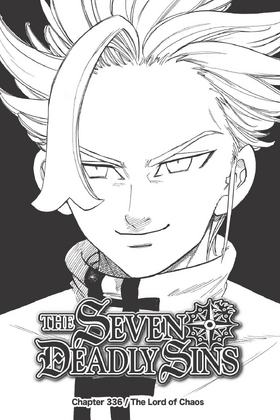 The King of Chaos「混沌の王 Konton no Ō」 is the 336th chapter of the manga, Nanatsu no Taizai.

Arthur Pendragon has been revived and become the "King of Chaos". Meliodas tries to talk to him, but Arthur still believes that he is the evil Meliodas who led the Ten Commandments and his powers go out of control, causing chaos everywhere until Merlin calms him down, explaining that Meliodas has gone back to his normal self since the last time he and Arthur met. Meliodas then asks for Merlin to explain "Chaos" and she begins to do so.

Q377. Meliodas-san (From England): Why the face of the Supreme Deity cannot be seen?

Nakaba: Because it's the light itself.

Q378. Kocchi-san (From Osaka): What does Arthur think of Cath?

Nakaba: That it is a strange creature.

Retrieved from "https://nanatsu-no-taizai.fandom.com/wiki/Chapter_336?oldid=142806"
Community content is available under CC-BY-SA unless otherwise noted.