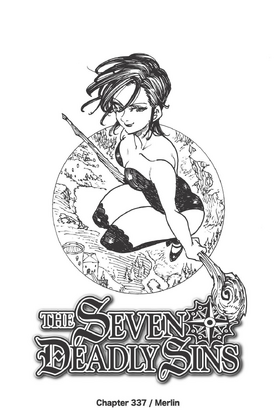 Merlin「マーリン Mārin」 is the 337th chapter of the manga, Nanatsu no Taizai.

The "Lady of the Lake" emerges to aid in Merlin's explanation of Chaos, explaining that Merlin has kept a lot from Meliodas and the other Seven Deadly Sins. The Lady of the Lake explains how Merlin was raised as a weapon to fight high ranked demons and goddesses but fled. Merlin was almost caught by her fellows but was saved by Meliodas whom she fell in love with, however Meliodas never returned the feelings and instead fell for Elizabeth. Unable to bring herself to hate them, Merlin returned home to become the best at the magical arts, with the goal of eventually filling the gaping hole in her heart. She eventually learned of Chaos and how it created the Demon King, Supreme Deity and Sacred Tree before going on to create the Giant Clan and then the Humans - who were the perfect embodiment of chaos. In response to this the Demon King and Supreme Deity worked together to seal Chaos away. Merlin then went on to manipulate the events of the past 3,000 years with the end goal of reviving Chaos so that it could fulfill her starving heart.

Q380. Nekotomo-san (From Kagawa Prefecture): Does the common language within Britannia used in the story exist in real life?

Nakaba: Well... It's set in England, so it should be English.

Retrieved from "https://nanatsu-no-taizai.fandom.com/wiki/Chapter_337?oldid=138158"
Community content is available under CC-BY-SA unless otherwise noted.