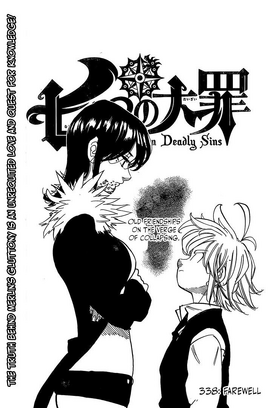 Birth「誕生 Tanjō」 is the 338th chapter of the manga, Nanatsu no Taizai.

Nakaba: Sometimes some seitai (a sort of therapy). Or watching a movie? Playing a game? Hanging out with my wife?

Q382. Buta no Boushi-san (From Kagawa Prefecture): Is Nanashi a Japanese person?

Nakaba: We don't know exactly. But he's a human from an eastern country drifting in Britannia.

The Last Page of Chapter 338

Retrieved from "https://nanatsu-no-taizai.fandom.com/wiki/Chapter_338?oldid=149871"
Community content is available under CC-BY-SA unless otherwise noted.