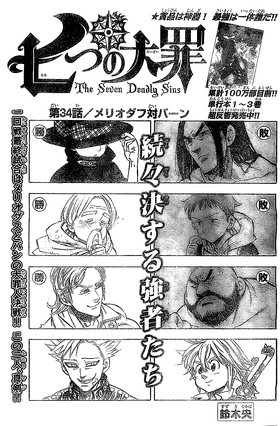 Howzer learns of Meliodas and Ban's identities. As Ban and Meliodas' battle begins, Meliodas punches Ban in the face, which reminds the latter of their first meeting, and how he ended up joining Meliodas for continuing their fight then. In the present, the two prove to be evenly matched, with Ban having the advantage in speed but Meliodas, in his physical strength. The battle causes much damage to the surroundings, and just when Meliodas is about to gain the upper hand, both opponents fall - with Ban ominously pointing his hand towards Meliodas, having used Snatch.

After being informed that the two Deadly Sins are among the participants, Howzer questions Veronica and Griamore whether the two were planning to capture the criminals alone. The princess answers that their primary objective was to ensure Elizabeth's safety, and then commands Howzer to not cause a commotion and endanger it. He, however, immediately starts running toward the fighting tournament, and, much to their chagrin, instructs them back to not ruin the tournament, and rejoices him being able to witness the legendary criminals' battle personally. In the fighting ring, Meliodas and Ban's weight and height are announced, as Diane and King cheer for the fighters, and Elizabeth seems reluctant to do so. As Love Helm begins the battle, Ban states that the battle would have been better if the ring were bigger, and questions Meliodas whether he is so excited for the battle, when his captain replies that "it" was as big then. Meliodas explains, saying that the rule of a fighter being disqualified if they are pushed out of a ring, reminded him of an event long ago, and then telling Ban that he will remember it soon, punches him in the face, reminding Ban of the event that has been mentioned: the episode that led to Ban's joining of Meliodas.

Many years ago, when Ban was still imprisoned for having burned the Fairy King's Forest and killed its guardian, Meliodas had then arrived at his prison cell, intending to have the convict join him, and was warned by Ban's guards of the man's immortality. As Meliodas enters the cell, Ban, thinking that another execution was to be performed, tells him that he will merely sit as he is executed, only to find that the individual who had entered was a child. The young man then asks Ban to come with him, he refuses and states that nothing existed for him outside, and to Meliodas' declaration that he will take him out by force, states that he will not restrain his strength even against a child. Their battle is revealed to have ended with Ban being punched out of his cell, Ban being extremely excited by the fight; he then requests that they continue their battle. To Meliodas' statement that he would have to join him for continuing, Ban merely continues to smile, implying that he later joined his captain for merely continuing their fight.

In the present, Ban seems to have been pushed out of the ring, but regains his balance and tries to slam Meliodas on the ground, face first; his opponent, however, stops this attack, and using his legs to grab Ban's face, slams the Sin of Greed in the ground. Immediately getting up, Ban kicks Meliodas above, and attacks him with a huge barrage of punches, with Meliodas blocking them, and then punching him back, the force of this one punch sending Ban to crash onto the ring, and even break the the Great Vaizel Rock. Ban, much to the audience's surprise, is revealed to be unscathed from the attack, and continues to fight. As their battle continues, Meliodas punches Ban in the stomach, and sends him flying; he, however, then falls down himself, Ban appearing to have used his ability, "Snatch".