Because I Wanted to See You 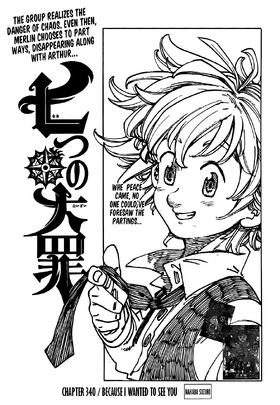 Because I Wanted to See You「あなたに会いたくて Anata ni Aitakute」 is the 340th chapter of the manga, Nanatsu no Taizai.

While the Sins and the others try to figure out Merlin's feelings back in liones, Cath Palug in his true form approaches Merlin and Arthur for a rematch.

Having sent back to Liones by Merlin, the remaining Sins and Elizabeth question Merlin's actions while their captain Meliodas says that Merlin might probably be jumping with joy.

Merlin looks outside a window from the creations of Arthur's subconcious, contemplating how interesting Chaos' power is and notices that Excalibur shifting through forms is yet to achieve it's final form and arriving at the conclusion that Arthur's potential is yet to be realised completely.

Diane is worried about the future of their band while King consoles her and Ban exclaims that there is beginning as well an end for everything and reveals Escanor's death to Hawk who finds it hard to believe. Meliodas explains how Chaos is not gone and the threat it can pose when Arthur's mind falls into darkness. When Meliodas says that he will have to personally ask why Merlin chose now of all times to mention chaos to which Gowther responds by saying how he still does not know Merlin's feelings.

Meanwhile Arthur is happy to see Merlin acting how she always did. While Merlin asks for his forgiveness for making him the King of Chaos without his consent for which he replies by saying that such Great power will only help people in right hands. Cath suddenly appears in a size and shape more monstrous than before and challenges Arthur to a rematch to which Merlin answers and attacks Cath.

Q385. Kouhei-san (From Miyazaki Prefecture): Sensei, tell me who are your favorite filmmakers.

Q386. Jefferson-san: What's the most Chastiefols King can use at once?

Retrieved from "https://nanatsu-no-taizai.fandom.com/wiki/Chapter_340?oldid=142802"
Community content is available under CC-BY-SA unless otherwise noted.