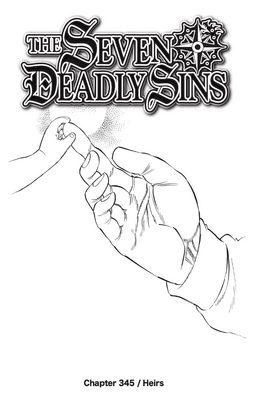 Heirs「継がれゆくもの Tsugareyuku Mono」 is the 345th chapter of the manga, Nanatsu no Taizai.

A year and half after Demon King and Cath's defeat, peace have predominated to the point most Liones' villagers live their lives harmoniously. While some move on from war repercussions like Hendrickson or Dreyfus others like Deathpierce vows to never being deceived and manipulated ever again. There have not being rumors or news of the rest of Seven Deadly Sins except for King and Diane who apparently are already married and expecting. King Bartra is overjoyed for his grandson's upcoming birth and is looking for a perfect gift for his dauthers angst and claims he already knows his grandson gender thanks to his magic power. Meanwhile both Ban and Meliodas are with Elaine and Elizabeth respectively discussing how they should name their children. Ban chooses to name his child Lancelot and Meliodas figures Tristan as his child name as he wonders what the future hold for them.

Eighteen months after the Demon King and Cath's defeat at the hands of the Sins. Slader and Simon are talking about the peaceful times they live and how Simon wishes for something more exciting that slaying worms and capturing bandits, to which Slader asks if he would want to fight demons again, to which Simon replies negatively. Slader remarks that he is content as long as he is able to serve His Royal Highness to which Simon asks if he is referring to Meliodas, causing the Diamond Holy Knight to glare at him, before saying that he only takes orders from Bartra.

At Liones, Howzer takes on Jericho and Guila in a sparring match, before Puora lands on Howzer's head to deliver Jericho a message regarding Ban and Elaine which prompts her to excuse herself and run away. Howzer mentions that Jericho is not treating him any different considering that he is Great Holy Knight rank, to which Guila replies that she thinks that that is what makes him so wonderful.

Arden, Deldry and Waillo are seen asking a departing Deathpierce about where he's going. Deathpierce replies that he will return to his hometown of Edinburgh and work on its restoration, remarking that he has no intention of serving a countrty where a Demon and a Goddess are King and Queen, vowing to build a kingdom for and only humans. Dreyfus and Hendrickson are seen conversing, with the former having resigned from being a Holy Knight and becoming a sword instructor and the later opening a potions school.

Meanwhile in another castle King Bartra is looking and asking for Veronica's or Margaret's approval for a baby toy. The conversation turns very uncomfortable as Bartra ask when their daughters will have their children with Gilthunder and Griamore respectively. As Veronica asks her father how he can be so sure of his grandson's gender, Bartra says he already knows thanks to his Vision.

Meanwhile in Fairy Forest Gerhade nags some curious fairies who are peeking at Ban and Elaine, both are expecting their first child. Elaine remarks her pregnacy is quite abnormal as fairies are born from flowers or threes and that would make her the first ever known fairy to give birth to a child. As they talk Ban tells her he already picked the perfect name for the future child.

Back in Liones Meliodas and Elizabeth are having a similar conversation, the latter is as well pregnat and ask her husband why he looks so reflexive, to which Meliodas replies he just got the name for their son; he says Tristan as in the Fairy Forest Ban tells to Elaine "Lancelot". Meliodas approach a windows and gaze at the sky wondering what the future will look like.

Q399. Gudenoko-san: Won't Ban and Elaine hold a wedding ceremony like King and Diane will?

The Last Page of Chapter 345

Retrieved from "https://nanatsu-no-taizai.fandom.com/wiki/Chapter_345?oldid=153955"
Community content is available under CC-BY-SA unless otherwise noted.