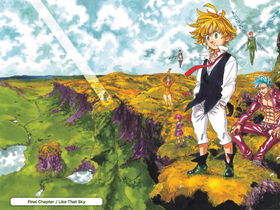 Like That Sky「あの空のように Ano Sora no Yō ni」 is the 346th and final chapter of the manga, Nanatsu no Taizai.

Ten years after the Seven Deadly Sins parted ways, Tristan, Meliodas and Elizabeth's son and Liones' current prince, overhears that this legendary group is assembling at the kingdom so he decides to fight them.

A little kid is running through town. Behind him, a guard from Liones castle is on his chase, referring to the kid as Prince Tristan.

After evading the guard, Tristan gather a group of his friends and communicates them an urgent matter: after hearing a maid gossips, he got to know that the legendary group of criminals, the Seven Deadly Sins, will reunite at the Liones castle that same night, and he fears that they want to take over Liones. However, the children did not believe him and leave.

Back in the castle, Tristan states that he will defeat the Seven Deadly Sins by himself. Tristan tries to sneak in, but it is stopped by Elizabeth. While Tristan delivers his secret information to his mother, the very Seven Deadly Sins appears behind him. Everyone greets Tristan. Diane pets him on the head while stating he is cute but King says he is, but not like their own kid. Gowther comments on Tristan's Power Level, stating that is impressive, despite being a child.

Then, Tristan states that he knows how the Sins and his father were exiled from the kingdom and are planning to take over the kingdom tonight and states that Howzer and Hendrickson got his back. Meliodas plays along and declares that now he cannot let him live. In a state of shock, Tristan charges at his father, claiming that a Holy Knight will punish him. Surprised, Meliodas asks him if he wants to be a Holy Knight, to which his son replies affirmatively. Tristan challenges them to a fight. Meliodas and the rest lead him outside, where fireworks are being used.

It is revealed that it is actually Tristan's tenth birthday celebration. Everyone cheers for him, welcoming the Seven Deadly Sins as well. Ban goes up to Tristan and says if his old man were really a villain, everyone in the country would not admire him that much. His father then asks what he wants for his birthday. Tristan then says a legendary sword but his father refuses it. Gowther then says he shall give him a special gift. Gowther uses his powers to show him the true story of the Seven Deadly Sins which leads Tristan to shed a tear.

The next day Meliodas and Tristan are training with the sword, as they wait for Elizabeth to prepare a picnic lunch. Tristan asks his father why he did not tell him the truth. Meliodas wonders what kind of adult his son would become. Tristan manifests some concern over having to become king, but Meliodas tells his son that it is fine if he does not want to be a king and that him being a Holy Knight is fine too. Tristan then declares that he will be one of the Seven Deadly Sins.

Q400. Mayacchi-san (From Hyougo Prefecture): What do you want to do first once the series ends?

Q401. Rokotsu-san: Golf, martial arts, figure skating, kendo, which sport do you like the most?

Nakaba: From what I saw, each one has interesting things so I like them all.

Q402. Takashiki-san (From Osaka): What does Hendy think of Dreyfus's long hair?

Q404. Yuuka-san: Do the Fairy King or their siblings all grow wings and awaken after some time?

Nakaba: Only King and Elaine. It seems like their growth came late.

Q406. Nazuna-san: Did Liz remember the memories of her previous incarnations?

Nakaba: She did the moment she died.

Q407. Moi-san (From Tokyo): Did King and Diane have their own room in the new Boar Hat inn?

Nakaba: They did, I just didn't draw it. (laughs)

Q408. Teruterubouzu-san (From Mie Prefecture): How do you think about the story, Baccho-sensei?

The Last Page of Chapter 346

Retrieved from "https://nanatsu-no-taizai.fandom.com/wiki/Chapter_346?oldid=149880"
Community content is available under CC-BY-SA unless otherwise noted.