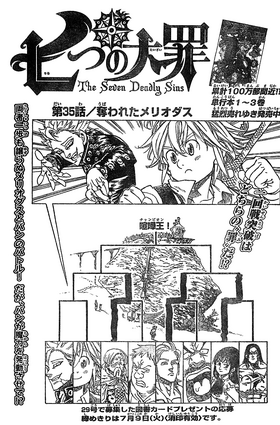 Meliodas and Ban's battle continues, and results in Ban stealing all of his opponent's physical abilities.

As soon as Meliodas falls down to his knees, Ban, his wounds having instantly healed by his immortality, immediately gets up and continues the battle. Meliodas, in response to the attack, flings a punch; Ban, however, somehow easily goes behind Meliodas, and punches him from behind, the single punch having a great amount of force, Meliodas' apparent weakening drawing encourages from Diane. As Ban displays his seemingly increased speed, and claims that his body is very light now, Meliodas instantly gets up and punches him, and after Ban is pushed back by the punch, attacks him again with a flying kick. This time, however, Ban easily dodges the attack and headbutts back, the attack seeming to have caused great damage. Meliodas seems to be continuously losing his stamina and the battle as he fights, leading Diane to wonder the reason for that. Answering her question, King points out that just as Meliodas become sluggish, Ban had become more agile, explaining that Ban's ability, Snatch, enabled him to "rob" not only physical objects, but also physical abilities such as speed and stamina; the reason why Meliodas was on his knees without receiving any damage was that Ban had "robbed" him of his physical abilities.

As the battle continues in Ban's favor, he then punches his opponent in the face. Meliodas somersaults in the air, and lifting Ban with one hand, smashes him repeatedly on the ground. He, however, stops doing so for a moment, with Ban then punching him; the punch appears to cause Meliodas difficulty to defend against. Ban is then revealed to now have stolen Meliodas' raw strength during the latter's smashing of him, and be in a state of ecstasy at having a great amount of strength in him. As Meliodas looks at his shivering hands, Ban, wanting to test the strength he has stolen, punches him, only for his hands to be severely damaged, and him, to be sent flying, by Meliodas' counter. Before he goes outside the ring, however, Ban stops himself and, commenting that even this punch was defeated, wonders how bottomless his captain's powers are.

He, again, instantly heals his wounds, and states that he has decided; upon Meliodas questions him as to whether he has decided to give up or has prepared himself to be defeated, Ban replies that since the battle would not end by stealing of speed and strength in small doses, he will now rob all of Meliodas' abilities. As Meliodas attacks Ban with a barrage of punches, and the latter continues stealing the former's abilities, King states that Ban will be the victor if he manages to steal all of the Meliodas's abilities, but that the Sin of Wrath will win if he defeats the his opponent before then. In the end, as all of Meliodas' abilities are shown to have been stolen before he is able to defeat Ban, the Sin of Greed smirks while standing over his collapsed and weakened captain.