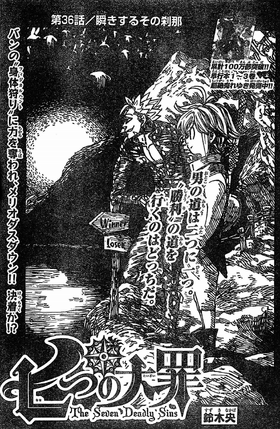 That Blinking Moment「瞬きするその刹那, Mabataki Suru Sono Setsuna」 is the 36th chapter of the manga, Nanatsu no Taizai.

Ban and Meliodas' battle finally results in the latter's victory, despite the former having stolen all of his abilities; the phenomenon of Meliodas' eyes turning black, and a strange black colored symbol appearing on his forehead occurs again, and appears to have increased his strength. As Diane then hurriedly hands Meliodas the shrunken Elizabeth before her battle with Howzer, the Sin of Wrath pervertedly looks at Elizabeth.

After Ban completely steals all of Meliodas' abilities, he tests them out by swinging his hand, the mere resulting air pressure creating a crater on the ground, Ban's strength greatly shocking Howzer. Ban questions Meliodas if he will give up, or be utterly defeated; Diane, from the audience, yells at him that if he further harms Meliodas, she will not forgive him and will cut their ties. The Sin of Wrath refuses to give up, and states that he will win. Ban readies the final blow, and Love Helm replies to the villagers asking him to stop the battle, that if the contestant is not out of the ring, and refuses to give, the match can't be stopped. As Elizabeth pleads to Diane and King to stop the battle, Diane states her hypothesis that Meliodas is baiting Ban to delivering his most powerful blow, and will then reflect the blow with Full Counter back at Ban. King, however, explains that doing so would be impossible - Full Counter can only reflect "power" attacks, and is useless against indirect attacks such as Ban's Physical Hunt, or an ordinary punch. Despite Elizabeth's pleading, Ban punches Meliodas; the latter is seen coughing blood due to the attack. When the dust and debris from the attack settles, Meliodas is then shown to be the only one inside the ring, with him then informing the audience and Love Helm about their exchange having resulted in Ban crashing in a building far away, and essentially, being pushed out of the ring.

After Meliodas is proclaimed the winner, King states that he had felt something strange during the aftermath of Ban's punch. Diane responds that she was able to see it clearly, explaining that in the midst of the resulting dust and debris from the punch, Meliodas crushed Ban's hand, then going on to defeat him; she also explains that Meliodas' eyes were colored black, and that he had a strange black colored symbol on his forehead. As Elizabeth wonders if the black colored symbol was the same one Meliodas had had during Golgius' trying to take his sword in Dalmary, Diane states that she has seen her captain having the mark once before, and that it makes her feel uneasy.

Meliodas then walks towards them, and upon King questions him if he is alright, states that as soon as he defeated Ban, he regained all his abilities, leading Diane to mentally wonder as to how he was able to counter Ban's attack, before the Sin of Greed was defeated. The next battle is declared to be between Matrona and Howzer, Matrona being the name Diane has used to enter into the Fight Festival. Diane hurriedly hands Meliodas a shrunken Elizabeth and the princess' pendant, before leaving for the battle, the Sin of Wrath smirks pervertedly at the sight of a shrunken and naked Elizabeth.