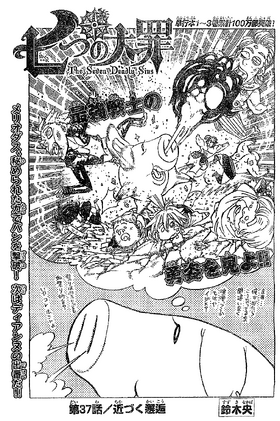 Approaching Chance Encounter「近づく邂逅 Chikazuku Kaikō」 is the 37th chapter of the manga, Nanatsu no Taizai.

Diane, who has joined the Vaizel Fight Festival under the name of Matrona, begins her battle with Howzer, and appears to have trouble defending against him. Meanwhile, Cain, during a discussion with Taizoo, appears to know about Danafor's fate. After Diane reveals that she was having trouble only due to her trying to not have Elizabeth's clothes be torn, and displays her strength, Guila and Jericho are shown to be traveling to Vaizel. Finally, as the battle continues, Diane appears to be returning to her normal size.

Hawk walks through the crowd surrounding Ban, who has crashed into a building following his defeat at Meliodas' hands, and is lamenting at his defeat, having forgotten about what he calls, his captain's "trump card". As Hawk unwittingly carries Ban due to him feeling his body to be very heavy after using "Physical Hunt", the talking pig states that he smells a storm brewing.

In the fighting ring, Diane turns back at a cheer, and upon finding Meliodas teasing the shrunken and naked Elizabeth, is angered at him not cheering for her; Meliodas continues teasing the princess as the latter does cheer for the fighter. Meliodas then questions Elizabeth as to what was wrong, to which she states the reason she has been dejected for some time: she believes that the reason Meliodas behaves this way towards her is that he doesn't consider her to be important to him. The Deadly Sin, however, does not hear her response over the other noises, leading her to add that she was just talking to herself, and mentally state that no matter what Meliodas thinks of her, she has resolved to believe in him. She proceeds to then tell him that she was very worried about him during his fight against Ban; he replies that he will not battle like that again, but mentally adds that he will only do so when she is nearby.

Love Helm begins the battle; Diane mentally reminds herself to be careful, and not ruin her disguise. Howzer seems to notice something, but turning to the side, points to Diane's chest, whose chest button was undone. Love Helm comments Howzer to be a gentleman for doing so, but also states that part of the audience disapproves of his action, and wonders if Howzer, despite his looks, has a pure heart, to the Holy Knight's embarrassment.

Somewhere nearby, Taizoo, upon waking from his unconsciousness, discovers Cain to have carried him from the area where he landed following his defeat. Cain commends Taizoo for putting up a good fight, but the former mountain bandit retorts that it was certainly not so, and he had, from the beginning, known of the difference in his and Howzer's strengths, and of his opponent being a Holy Knight. In the fighting ring, Howzer charges towards Diane, using the same technique he had used in his previous battle, to use his wind manipulation-related powers to form a small tornado around his arms, and attack with it. Diane manages to dodge it, and states that such an attack can cause great damage. Howzer agrees to it, and continues to repeatedly attack her, while stating that, if she stays still, she won't be hurt, instructing her to stop struggling against him and leave it to him, and that the attack will feel "great", and be similar to flying. Meliodas, in response to the Holy Knight's statements, comments that he is amazing for so many repeated double entendres, much to Howzer's anger, with him replying that he dislikes hurting women no matter how strong they are.

As Love Helm comments that Diane can only defend herself against Howzer's attacks, Taizoo commends her for even doing that, and adds that if she is caught within the twisters even a bit, she will be defeated, and that Howzer's attack was not something an ordinary human could withstand. Cain replies to Taizoo's statement that it was as if the defeated fighter has had an unpleasant experience with a Holy Knight; the latter admits to have had one with a Holy Knight from Danafor. Cain's reply makes it seem as though he knows of the now destroyed kingdom's fate, which was being destroyed at Meliodas' hands, after the Sin of Wrath had lost himself in his wrath.

Howzer, despite not wanting to harm a woman, forms two twisters on either side of Diane, and then goes toward her to punch, but finds his attack to be easily stopped by his opponent, leading him to bewilderedly cite Diane's earlier comment that his ability was dangerous. Diane pushes him away with a single slap, and states that she had actually said so, because she had not wanted the clothes she has borrowed from Elizabeth to be torn.

Somewhere else, Jericho and Guila, along with another armored individual, are shown to be riding two huge ray-like creatures with several large and sharp teeth, and to be wearing, and wielding, new armors and weapons. As they travel to Vaizel, Jericho expresses her anxiousness to use the powers she gained from drinking the demon's blood, to their fullest. Back in Vaizel, Howzer states that he can finally unleash his full powers, to which Diane expresses her anger at his attacks having torn her clothes. Just then, her skirt appears to be tearing, implying that her size is returning to normal.

Retrieved from "https://nanatsu-no-taizai.fandom.com/wiki/Chapter_37?oldid=123280"
Community content is available under CC-BY-SA unless otherwise noted.