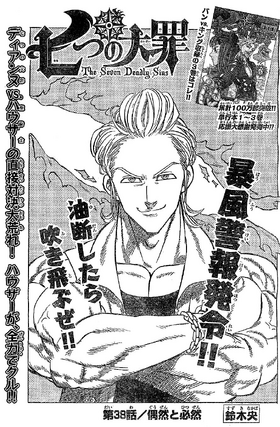 Chance & Necessity「偶然と必然, Gūzen to Hitsuzen」 is the 38th chapter of the manga, Nanatsu no Taizai.

Howzer unleashes his full strength, but even so, is relatively easily defeated by Diane when she fights seriously. However, He does manage to learn of her being one of the Seven Deadly Sins. After Cain and Meliodas walk into the ring for their battle, Cain questions Meliodafu whether he is Meliodas' son. When his opponent states that he is Meliodas himself, Cain, reveals himself to be from Danafor, and declares that he would never forgive Meliodas, who had betrayed "everything he stood for".

As Howzer states that he has now become interested in Diane's powers, Elizabeth tells Meliodas that Howzer should not become serious, since, though he is normally an easy-going person, he wouldn't stop once he has become serious. As she says this, Meliodas wonders if she her size has grown a little. Meanwhile, Howzer mentally states that despite him not using weapons, this was the first time any opponent was not affected even slightly by his power, "Tempest". Wondering if Diane is also a Deadly Sin, he then uses his abilities to form a large horizontal twister, warning Diane to flee or die. Much to his shock, however, she remains unharmed, leading to his confirmation that she is a Deadly Sin.

Not giving up, Howzer slams the ground with his hands, thus manipulating the air to create a gigantic twister, large enough to resemble an actual tornado; the twister covers completely the entire ring. Howzer questions Diane as to how his attack is, and adding that she would not be able to breathe properly, let along talk, due to it. As Meliodas and King expresses their worries, Ban states that Hawk will be sucked in by the twister if he lets his feel off the ground even for a moment. Claiming that Diane will be ripped to shreds if she tries to resist the twister's centrifugal force, Howzer rejoices his victory as Diane is pulled above. In response, she uses a technique that appears to make her body much heavier. Diane then uses the increased gravitational force to attack, and thus defeat, Howzer from above.

Diane is declared as the victor; Howzer acknowledges his defeat, and Diane, apologizes, explaining that she lost her self control and became serious. In response, Howzer states that he is honored to have been fought seriously by a member of the Seven Deadly Sins, and does not believe Diane's weak lies that she was merely a girl happening to pass by Vaizel. He confirms her identity when King addresses her as "Diane", with her then apologizing again, and walking away. As Diane apologizes to Elizabeth for ruining her clothes, and Taizoo expresses his surprise at a Holy Knight being defeated, Cain and Meliodas head inside the ring, their battle having been announced. While both of them are being cheered on, Meliodas states that his having to fight the elderly man who gave him directions before is a coincidence, and also adds that Cain's having defeated "Old Fart" did not seem like a coincidence.

Cain replies that the world ran on fortuity and necessity, and also that while both him and Meliodas entering the Fight Festival on this day may be a coincidence, him entering the tournament was not. He also questions his opponent, after stating that he became certain when he heard the name "Meliodafu", whether he is Meliodas' son. He is greatly bewildered and shocked when Meliodas answers that he is the man himself. Cain initially refuses to believe so, adding that if Meliodas were alive, he would be in his thirties. Meliodas, stating that he didn't know who his opponent was, questions him as to what if he was the Meliodas, Cain knew. As Love Helm begins their battle, Cain states that he found Meliodas' identity hard to believe, but that if he were Meliodas himself; before finishing his statement, he attacks his opponent repeatedly, all of which are blocked, and then jumps back. Removing his cloak and revealing a shirt with a symbol inside, Cain declares that he will not forgive someone like Meliodas, who betrayed the "kingdom he swore to protect", "the people", "the person most important to [him]", and "everything [he] stood for". Meliodas then recognizes the symbol on Cain's shirt, as Danafor's symbol.