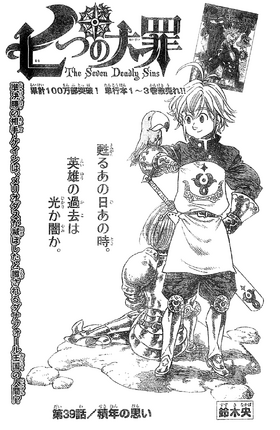 A Longstanding Grudge「積年の想い, Sekinen no Omoi」 is the 39th chapter of the manga, Nanatsu no Taizai.

The crowd begins wondering about Cain's identity, as the battle begins with Cain questioning Meliodas why he destroyed "the kingdom" whilst sending a blast of flame with his ability, Blaze. The Deadly Sin allows himself to be attacked, remaining silent when Cain asks him about his supposed betrayal. Finally replying to the questions, Meliodas uses his ability Counter Vanish and convinces Cain to believe his words, who finally decides to forfeit the match. Diane joins her captain on the arena, both preparing for the final round, when Ban intervenes their plan and stimulates her jealousy.

As the audience discuss about Cain's shirt bearing the crest of Danafor, Elizabeth mentally states her father had told her about her originating from the kingdom once. When King and Diane wonder as to Meliodas and Cain's relationship, Ban instructs them to stop, citing the third law of the Seven Deadly Sins, which states that a Sin shall not question of the sin of an another member. Howzer similarly wonders about Cain; Taizoo answers that Cain's attire is the traditional armor of Danafor's Holy Knights.

In the ring, Cain uses his yet unnamed ability to create fire in the form of a fireball from his hands, and questions Meliodas for the reason he destroyed "the kingdom", a question that alarms him. Cain then releases the fireball, and Meliodas appears to be unable to defend himself. When Diane cheers on, and King proposes his theory that Meliodas is injured from his previous fight, Ban explains that Meliodas is, in fact, not defending willingly. Cain continues his attacks, all the while continuing to question his opponent as to the reasons he killed the people of the kingdom, his comrades, and Liz, the person most important to him. The final questions regarding Liz leads Meliodas to, for a short moment, think about her. Cain, ending his attacks, then releases a giant fireball towards Meliodas. The latter answers Cain's series of questions, stating that he had tried to protect them, but failed, and that this failure is his sin. He lifts his hand, and with his palm facing the incoming attack, folds his thumb and little finger, using a technique that completely disperses the attack. Cain immediately recognizes this technique as "Counter Vanish", a technique that completely disperses any attacks aimed at the wielder.

Meliodas' use of "Counter Vanish" convinces Cain of his identity, as Meliodas replies that he has come to remember Cain as well, revealing his full name, nickname and ability as Cain Barzad, "The Flame Barzad", and Blaze, respectively. The Holy Knight walks towards his opponent, and questions whether he can believe the claim that Meliodas did not betray Danafor. When Meliodas affirms so, Cain hugs him in happiness, and while expressing his emotions, explains that he found Danafor to be completely destroyed when he returned from his mission, and that rumors of Meliodas having destroyed it turned his doubts into suspicion. He adds that he is very happy to have met a comrade from the past, and then forfeits the match when Love Helm interjects. Commenting Meliodas to be as naive as always for not reflecting his attack, Cain then walks away from the ring, stating his intentions to watch the finals. As he walks towards Howzer and Taizoo, he greets them and questions if they have more energy, which they affirm.