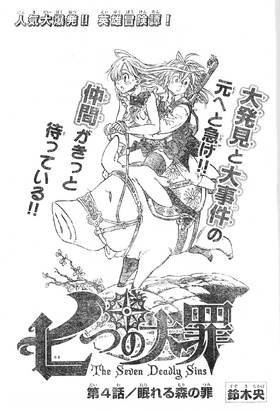 3
The Sin in the Sleeping Forest「眠れる森の罪, Nemureru Mori no Tsumi」 is the 4th chapter of the manga, Nanatsu no Taizai.

Meliodas, Hawk and Elizabeth travel to the Forest of White Dreams that even Holy Knights avoid, and is a good place to hide from them. There, the Prankster Imps that inhabit the Forest of White Dreams attempt to confuse them by impersonating Hawk and Elizabeth in order to lead them away. After defeating them, they follow them and find the Serpent's Sin of Envy, Diane sleeping in the forest.

Having learned that the Forest of White Dreams is avoided by even Holy Knights due to the danger it poses, during the celebration in Bernia, the three travel there. Having lost their sense of direction due to the forest's fog, and not finding even one animal or person after walking for more than three hours, multiple copies of Hawk appear and claim to be the real one, trying to confuse Meliodas and Elizabeth. The young man, however, mercilessly defeats all the copies, including the real one, which leads the "monster" of the forest to impersonate Elizabeth.

The impersonations, all claiming to be the real one and ordering the "human pests" to leave the forest, try to capture Meliodas, but fail as he evades everyone. As each of them declares that "she" will do anything to prove that "she" is real, Meliodas, initially taking advantage of the declaration, then tells them to jump as high as they could. All of them, except the real one, do so, since Elizabeth's panties had been stolen by Meliodas before, and she was embarrassed to jump.

Defeated, all of the copies show themselves to be Prankster Imps that inhabit the Forest of White Dreams. As the creatures retreat, the three follow them, and find them to be going toward a girl and apologizing to her for allowing a Holy Knight to come through, since the imps believed Meliodas to be one.