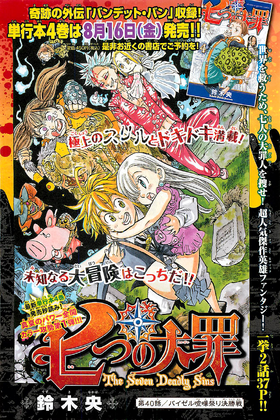 Diane falling victim to Ban's elaborate ruse gets mad at Meliodas and seriously attacks him once their fight begins. The captain of the Seven Deadly Sins quickly has to take her anger seriously and as the fight continues he is more and more left at a disadvantage, merely dodging Diane's assault. In the middle of their encounter both stop and Meliodas declares his "true intention" of sacking Vaizel. The Seven Deadly Sins' members unite at the fighting platform, revealing their identity to the crowd and threaten to massacre everyone who doesn't leave within the minute.

The great boulder of Vaizel cracks further due to Diane's punch, due to which Love Helm directs the audience to evacuate. Meliodas realizes Ban's plan in order to have him and Diane Meliodafu vs. Matrona fight properly, and as the enraged Diane attacks him, he tries to convince her that it was a misunderstanding. She refuses to believe so, and he, narrowly dodging one of her punches, comments that he would need to fight her seriously or else get seriously injured. Both exchange a barrage of punches and attacks, the magnitude of whose power is so great, that the entirety of the huge boulder on which the ring of the Fight Festival is located, begins to shake, as the frightened audience looks on.

The battle continues, with Diane kneeing Meliodas in the chest, and almost pushing him out of the ring with a punch, when he retaliates. Cain ponders whether Diane is even human, since her power is on par with Meliodas' or even above; Howzer then ponders on Diane's size being normal, since she was said to be from the Giant's Clan. In the battle, Diane charges at Meliodas again. As he punches her back, he asks where she is taking all that excess strength, even after shrinking. He then jumps, and tries to land a punch from above, stating that this would be the end. Diane, however, stops the punch with an uppercut, and then socks Meliodas in the head when he tries to attack her again, sending him flying. Meliodas gets back to his feet, noticing her size to be returning to normal, having shrunk due to a Chicken-Matango previously.

As Diane slowly continues growing, she punches Meliodas, stating that she will never forgive him. He escapes through one of the cracks their battle has created on the ring, and continues to slip through the cracks to flee from every one of her attacks. While Howzer doubts whether the Deadly Sins were really criminals, the audience expresses its disapproval and dislike at the low seriousness of the battle, booing at the combatants. Meliodas, Diane, Ban and King seem to be alarmed by something, and Elizabeth, still sitting on Hawk, suddenly has a growth-spurt like Diane.

Meliodas stops fighting and declares that the "comedy routine" has now ended, and that he will now be sacking Vaizel, also adding that had the audience only played along, they would have lived that much longer. While the audience watches disbelievingly, Meliodas displays his symbol of the Dragon, and declares his identity as the captain of the Seven Deadly Sins, and the Dragon's Sin of Wrath. As the civilians argue that his appearance is very different from his wanted poster's image, but then notice his and Diane's symbols - the latter being the Serpent's Sin of Envy - Ban and King also enter the stage. Ban and King are immediately recognized, the former, due to his appearance resembling his wanted poster's image, and his symbol, and the latter, due to him having transformed into his fatter and adult form, which resembles the image on his wanted poster.

Meliodas continues that the four Sins have taken a liking to the town, but that he will give the civilians a chance since he is in a good mood: he orders every one of them to get out of Vaizel in one minute, lest they be massacred by them. As the extremely shocked audience watches in disbelief, Elizabeth questions their actions, and Howzer wonders if this is the Sins' true nature.

Retrieved from "https://nanatsu-no-taizai.fandom.com/wiki/Chapter_40?oldid=125122"
Community content is available under CC-BY-SA unless otherwise noted.