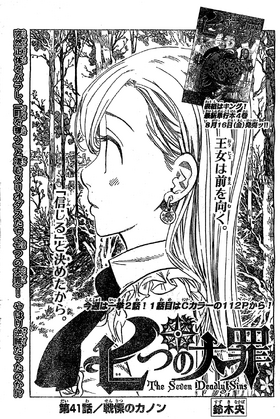 Hair-Raising Canon「戦慄のカノン Senritsu no Kanon」 is the 41st chapter of the manga, Nanatsu no Taizai.

Guila, Jericho and another Holy Knight arrive at Vaizel, interrupting the Fight Festival, and making an entrance with a shower of explosive flares delivered by Guila. The four Sins are shown to have ordered the citizens to leave in order to not become a victim of the Holy Knights' attacks, making themselves the villains as a result. The people thus begin cheering for the Holy Knights, thinking that they have come to save them, but are intimidated by the Sins into evacuating. A whole series of explosions sets off all around the mountainside of Vaizel town, and Ban is suddenly injured by a surprise attack from Jericho after the Sins have split up.

When the people hesitate after his threatening that he will massacre every one if they don't leave Vaizel in a minute, Meliodas yells at them again to leave the town. Just then, a gigantic meteor-like shower of explosive flares rains down on the town, destroying everything they hit in equally gigantic explosions. One of the flares targeting Vaizel's fighting ring is repelled by Meliodas using his Full Counter in order to save whatever onlookers are left nearby.

The assailant is shown to to be Guila, who arrived with back-up in form of Jericho and another mysterious Holy Knight, who was also previously revealed to be heading for Vaizel. The citizens, believing that the Holy Knights have come to save them, cheer for them, requesting them to defeat the Deadly Sins;  one citizen tries pointing out it's the Holy Knights that nearly killed them. However, Ban intimidates and threatena the citizens into fleeing. Elizabeth then understands the Sins' actions: the four had realized that the three Holy Knights were nearing Vaizel, and threatened them to leave, so that they would not be involved in the resulting battle. As the three Holy Knights descend from the giant ray-like creatures they were riding on, Meliodas notes that the weapons they are wielding now are on par with the Sins' sacred treasures. Realizing that their opponents are now probably incomparably stronger than Guila's strength in the Capital of the Dead, Meliodas instructs King, Diane and Ban to separate.

The explosions continue to ravage the town. Howzer directs the townspeople to evacuate, and appears to have believed that the explosions are the Deadly Sins' doing. Meanwhile, Veronica states that the attack was earlier than planned, since it has started before Elizabeth has been found. She then instructs Griamore to find and protect Elizabeth. Somewhere in the town, Ban walks while musing that the attacks are gaudy, and upon noticing a surprise attack coming towards him, dodges, but is sent crashing into one of the buildings by Jericho, who ran him through with her sword. When Jericho states that she has waited a long time for their battle, imagining to have hurt her opponent, Ban expresses his enthusiasm to fight. He then questions Jericho whether they have met before, and she, in response, declares that she will carve her name into his heart.

Retrieved from "https://nanatsu-no-taizai.fandom.com/wiki/Chapter_41?oldid=150710"
Community content is available under CC-BY-SA unless otherwise noted.