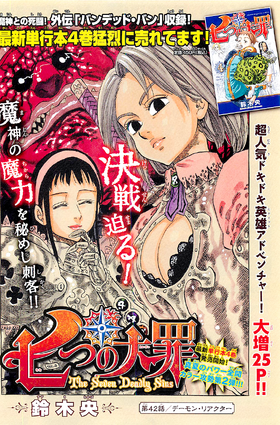 In the middle of the burning countryside Meliodas and Guila have their second encounter. Meliodas expects her to be out for revenge, gets ready for battle but Guila quickly cuts him off and defeats Meliodas with a new form of attack. Elsewhere, King is evacuating the remaining citizens while Diane desperately looks around the remnants of Vaizel rock for her sacred treasure Gideon but cannot find it. Meanwhile Ban and Jericho face off with Jericho quickly overwhelming Ban; his wounds somehow do not heal anymore and her attack speed and power quickly defeat him. Guila and Jericho further bully their victims when they meet each other. King is done evacuating, spots his unconscious teammates and engages in battle with Guila and Jericho but makes short work of their efforts, defeating them easily.

Meliodas and Guila greet each other, and unsheathe their weapons. Guila rejoices at their second meeting, declaring to be ready for more learning opportunity but Meliodas only suspects her desire for revenge. He agrees to fight her but she laughs it off, stating it won't even be a fight anymore: pointing her large lance towards Meliodas, she releases several explosive flares, which, to his surprise, stop midway before reaching him. He speculates they will explode if he makes a wrong move, and jumps to destroy them individually but the flare he is moving towards suddenly explodes, which triggers multiple chain explosions. During the resulting inferno, Guila says that her chain explosion can always set off randomly, when Meliodas, heavily injured, falls from great height. Guila thanks him for him cutting her hair while adding make-up on her at the Capital of the Dead, stating that a person most important to her complimented it, referring to Zeal. Somewhere else, King  helps in the evacuation of civilians as ordered by Meliodas, and carries Love Helm on his back while levitating. Diane, instructed to hunt for Gideon as soon as an opportunity opens up, reaches the bottom of Vaizel rock, but Gideon has disappeared.

Hawk and Elizabeth had been ordered to stay hidden. While Hawk secures their hideout he declares that he will protect Elizabeth no matter what. He becomes teary-eyed when she rebukes him, and replies that they both will survive together. Meanwhile, at the site of Ban and Jericho's battle, Jericho introduces herself, refreshing Ban's memory about their earlier encounter at Baste Dungeon. He, calling her the "barber boy" from earlier, realizes he is dealing with a woman now and questions whether she cross dresses. Kicking her away, Ban also mentions she surely remembers about him that he is immortal. Much to his surprise, the wound doesn't heal despite his regeneration abilities. Jericho, stating that the Deadly Sins are no match for the "reactors", attacks Ban with a technique named "Godspeed Cross Slash".  He attempts to doge to avoid further injuries to his now normal body but cannot outrun the slashes. Walking towards the collapsed Ban, she states that the reason she pretended to be a man was that she was weak, and wanted to make herself seem a little more powerful. Adding that she no longer has to do that, since her rage against him let her become powerful, she kicks him on his chest, which spurts a drop of Ban's blood near her lips. Spreading this blood on her lips, as a substitute for lipstick, she states that Ban has made her into a woman.

Though both Ban and Meliodas are very quickly defeated by their respective foes, the Holy Knights state that their battles were only a perk, and that their main enemy still remains. Few moments later, King appears from behind, telling Meliodas that he has completed his chore, only to find two of his fellow Sins defeated. Immediately, Guila releases the same technique she used on Meliodas, which results in a gigantic explosion like before. King appears to be worried, but when the attack settles, is shown to remain unscathed, by using the Form Five of Chastiefol as as moving, circular barrier around himself. As he states that he was joking, Jericho, without waiting any moment, immediately breaks through his barrier. Again acting as though he is surprised, King then shifts Chastiefol to its standard spear form and attacks Jericho from the behind, again stating that he was only joking. King stretches and yawns, declaring that he has warmed up, Guila and Jericho are shown to be defeated and collapsed. King inclines his head, wondering if that was all the Holy Knights had to offer.