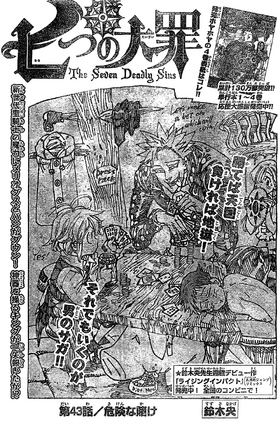 A Dangerous Bet「危険な賭け Kiken na Kake」 is the 43rd chapter of the manga, Nanatsu no Taizai.

King begins to interrogate Guila and Jericho about their true goals, stating they never had a chance against the Sins in the first place. Guila retorts that it will be the other way round, then the scene switches to Diane who is still fidgeting over Gideon's location. Howzer appears behind her, commanding her to stop her and her fellow Sins' plans immediately and is soon supported by the third mysterious Holy Knight called Marmas. Marmas then gets impatient with Howzer and defeats Diane by increasing the gravity around her. Somewhere else, Elizabeth and Hawk have taken Ban and Meliodas to a save location when they are discovered by Veronica and Griamore. Veronica and Elizabeth argue over Meliodas when he regains consciousness and tries to protect Elizabeth. Veronica then uses a spell to seal Meliodas away in a magical crystal which Elizabeth had received from her.

Hawk cheers King for his victory. King, wanting to interrogate Guila and Jericho, hands Hawk the responsibility of looking over Meliodas, Ban, and Elizabeth. King, deducing that the attack on him was to divert the Sins from the Holy Knight's actual goal, questions his opponents as to what their goal is. He declares that the Holy Knights will never defeat the Deadly Sins; Guila retorts back, declaring that the latter will annihilate the former. Somewhere else, Diane, after reaching the area where Gideon was kept, finds that it is not there now. As she wonders on her next course of action, Howzer walks up from behind, declaring that he is arresting her for murdering Zaratras and plotting to overthrow Liones.

Howzer doesn't believe Diane's denial of committing the crime; he believes that getting Gideon and taking over Vaizel was the first plan of their new plot. When Diane, in response, points that it was Guila's attack that damaged the town, the Holy Knight replies that they are Hendrickson's subordinates, and he does not know of their plans. Before Howzer can go on, Diane notices a civilian trapped under the debris from the destroyed village, runs to his help, and suddenly Marmas appears behind Howzer and also walks up to her. He states that he is here as the leader of the New Generation of the Holy Knights after asking Howzer whether he is going to arrest Diane or not. After claiming that the Sins wouldn't be a match for the New Generation without their Sacred Treasures anyway, he moves his two club-shaped weapons in strange ways, using a technique to multiple gravity in the area where Diane is by ten times. Seeing the civilian she is carrying to also be affected, she throws the man to Howzer, as the earth collapses due to her increased weight, caused by the increased gravity. Diane falls down into the hole and disappears while Howzer is shocked.

Meanwhile, Elizabeth and Hawk hide behind a house. Just as Elizabeth hangs the pendant that Veronica gave her earlier around the unconscious Meliodas' neck, Veronica and Griamore find them, having heard Hawk's noises. Veronica, surprised, questions Elizabeth on her having shrunk, when Elizabeth suddenly returns to her normal size. After Veronica gives Elizabeth some of her clothes, she states her intentions to take Elizabeth back from Meliodas, and notices the pendant she gave Elizabeth on his neck; Elizabeth immediately replies that it was her who gave it to him. Seeming to smile slightly, Veronica then states her intentions of taking Elizabeth back to the capital of Liones, before the battles intensify, and grabs her sister's hand. As Elizabeth continues to refuse, Meliodas regains consciousness and separates the two, much to Hawk's cheering, and proceeds to declare that he will protect Elizabeth with his life. Angered, Veronica retorts that Elizabeth is treated as a criminal due to Meliodas, and demands that he returns Elizabeth.

When Meliodas replies, again trying to convince her that he will protect Elizabeth, Veronica comments that Hendrickson was correct, and remembers about Hendrickson giving her the pendant, convincing her that she was the only one who could rescue Elizabeth. He had stated that the third princess was likely to have been brainwashed, and had explained that the pendant was called "Goddess Amber", which will affect demonic beings within a few feet. Since Meliodas is close to the stone, Veronica chants an incantation, due to which the stone shines brightly for a moment, and Meliodas then mysteriously disappears.

Retrieved from "https://nanatsu-no-taizai.fandom.com/wiki/Chapter_43?oldid=150714"
Community content is available under CC-BY-SA unless otherwise noted.