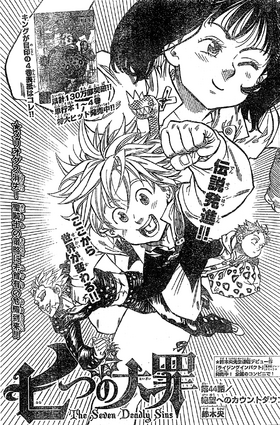 Countdown to Despair「絶望へのカウントダウン, Zetsubō e no Kauntodaun」 is the 44th chapter of Nanatsu no Taizai.

After Meliodas has been sealed inside the Goddess Amber, the group recovers from their dumbstruck state with Veronica triumphant over having succeeded in her coup. She gets into a fight with Elizabeth over the gem which is broken up in Veronica's favor by Griamore trapping Elizabeth with Wall and then is turned again into Elizabeth's favor by Ban sneaking up behind Veronica and taking her hostage. At a different location, King deals with Guila's and Jericho's stubborn attacks but easily dominates them and eventually prepares an attack to kill them which is thwartened out of nowhere. The judge introduced and disguised as Love Helm turns out to be the assailant and not only has saved Jericho and Guila from their impending doom but also reveals himself to be the Holy Knight Helbram who then proceeds to surprise attack a stunned King.

After Meliodas disappears, Elizabeth and Hawk are greatly shocked while Veronica triumphantly grabs the Goddess Amber, and concludes that Meliodas was a monster, since the stone affects only demonic beings. Disagreeing, Elizabeth tries to resist and threatens her sister with Meliodas' broken sword, asking Veronica to undo her spell, which, Veronica replies, she is not able to do. As she keeps refusing to accept Veronica's claims that Meliodas was plotting evil schemes, was taking advantage of her naivety and refuses to return to the castle, Veronica orders Griamore to form a barrier around Elizabeth with "Wall". Hawk trying to destroy the barrier fails despite his best attempts which are laughed off by the huge Holy Knight who claims that not even a meteor can destroy it. Much to the three's surprise, however, Ban suddenly wakes and boldly claims to be able to destroy it with only his hand, no, even his finger. When Griamore turns around, seeing how he holds Veronica hostage and points his finger at her throat, the implications become quite clear. Meanwhile, in the area where King, Guila and Jericho were fighting, King, levitating above the ground, mentally states that he cannot feel Meliodas' and Diane' energies at all.

He turns around to see his two opponents again standing up, and questions them as to what the Holy Knights have done to his fellow three Sins. When they ignore him, he merely turns around and begins to float away. Before King can finish his statement that he will kill the two the next time, they interrupt him by attacking together, with Guila releasing flares towards him, and Jericho attacking him with multiple cross slashes. After both very powerful attacks reach him, he is revealed to have dodged the assault by moving very high up, and as he completes his sentence, a giant plant attacks the Holy Knights. Guila theorizes the monstrosity to be another form of Chastiefol. King, confirming so, declares that it is the "Fourth Form, Sunflower", and mockingly states that the two were strong, but needed much more training to even amount to a threat. Ultimately, the plant blooms, revealing a flower, which then releases several energy projectiles towards his opponents. Much to his surprise, however, when completing his sentence the flower is destroyed before its projectile even hit the ground and a destroyed Chastiefol falls down. Guila and Jericho who seem to have come to terms with their impending death have suddenly disappeared, only leaving large holes in the ground where the energy projectiles struck.

While King wonders as to who damaged his sacred treasure, he finds Love Helm, the referee of the Fight Festival, still in Vaizel despite personally having evacuated him away. The referee, commentating a little on the battle, proceeds to reveal that he had rescued Jericho and Guila by hiding them under his cloak. He then twirls his cloak around, disappearing and - high above the ground - reappears behind King in a swirl of dark purple cloth. King, realizing someone warped behind him as a blade reaches his throat, now recognizes Love Helm's true identity; he is revealed to actually be the Holy Knight, Helbram.