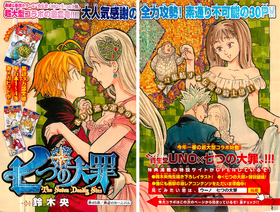 12
Carnival of Atrocity「暴虐のカーニバル, Bōgyaku no Kānibaru」 is the 45th chapter of the manga, Nanatsu no Taizai.

King, not having fully grasped the situation at hand hears Guila and Jericho offering Helbram their support which he denies by sending them to fulfill their true goal. After some smalltalk about a shared past, a fight to the death begins between Helbram and King in which the former quickly gains the upper hand over the Fairy King and gravely injures him while King only manages to unmask his old acquaintance. At Elizabeth's location, Griamore is set check-mate by Ban holding Veronica hostage and negotiating about bringing Meliodas back. Before his attempts come to fruit Ban is cut down from behind by Jericho who arrived with Guila in order to obtain Elizabeth and bring her to the Kingdom personally. Guila's rude attempts of convincing Veronica by threatening her are rewarded by Griamore with sealing the two Reactors inside his Wall. Elizabeth uses the commotion to escape with Meliodas' broken sword and the Goddess Amber, Veronica runs after her but - all according to Guila's plan - they set off an explosive mine which gravely injures Veronica.

Helbram, pointing his sword towards King's neck, greets his opponent, addressing him with his real name, "Herlequin", and questioning him about his bewildered expression. Guila and Jericho immediately state their readiness to support Helbram, which he declines. He instead instructs them to recover the target, and again questions King's nervous expression, commenting him to be a coward. The Fairy King, who is in his "adult" appearance, bewilderedly questions Helbram as to how the latter is alive. Helbram dodges the question, and King expresses his confidence in his power; as he notices an undamaged Chastiefol behind him, Helbram predicts King's thought to not underestimate Chastiefol, and comments on the Spirit Spear's ability to regenerate so quickly. However, he then easily kicks King away, while simultaneously blocking Chastiefol with his sword. King stops his fall with his levitation abilities, has Chastiefol spin, and releases it towards his opponent. Helbram, however, grabs Chastiefol, stopping the attack, without much effort, much to King's astonish, headbutts King, and throws Chastiefol behind.

As he walks towards King, Helbram comments on King's stamina, which is below human level, on his pathetic fight in the Fight Festival, and predicts King's frantic thought of his powers not working. King changes Chastiefol's form to that of "Increase", and attacks Helbram with the numerous small blades, with the Holy Knight stops in mid air by raising his arms. As Helbram slashes King in the chest, King frantically has one of his small blades hit Helbram's head, which removes his helm. Immediately retreating, Helbram then addresses King as "old friend" in his subsequent statements.

Meanwhile, as Ban holds Veronica hostage, Griamore demands for him to let her go, in return to which Ban asks for the spell on Meliodas to be undone, and for Elizabeth to be released. However, he is abruptly slashed from behind by Jericho, which allows Veronica to escape. As Guila walks towards the scene, and questions Griamore as to the princesses' injuries, Hawk humorously tries to "attack" her, only to be severely injured when she uses "Explosion". Noticing that Elizabeth, the Goddess Amber, inside which Meliodas is sealed, and Meliodas' sword are under their custody, Guila, smirking, comments that their objective is complete, and requests for Griamore to release his barrier around Elizabeth. When he does so, and Guila extends her hand in order to help Elizabeth, Veronica stops her, arguing that Guila and Jericho's aim was only to capture of Meliodas and Meliodas' sword, with Guila replying that a Holy Knights' duty also included the protection of a princess. As Veronica retorts that she has Griamore for that matter, Hawk again attempts to stop Guila. The Holy Knight, after attacking him with her lance, points the weapon towards Veronica.

Guila, explaining that Veronica is a princess only in name, orders her to hand Elizabeth over. Immediately, Griamore, unable to witness such insolence against Veronica, surrounds Guila and Jericho in a barrier. Veronica, stating that the two are to be tried in a court martial, grabs Elizabeth's hand and prepares to walk away. Guila, inside the barrier, tries to break it using her abilities, but due to Griamore reinforcing it, is damaged by her own explosion, that explodes inside. While Griamore and Veronica's attention is focused on Jericho and Guila, Elizabeth manages to flee. As Veronica runs behind her, Griamore refuses Guila's offer to help, to which she then reveals that her orders were to retrieve the princess, dead or alive. Only after a brief moment does Griamore realize the implications of this revelation, and runs behind Veronica, who is chasing Elizabeth herself. The princesses' running triggers a huge explosion, that prompts both Griamore and a severely injured Hawk to run towards it, worried about the princesses. As Guila explains that she had set up explosive mines beforehand, Veronica is shown to have protected Elizabeth from the explosion, at the cost of fatal injuries to herself.