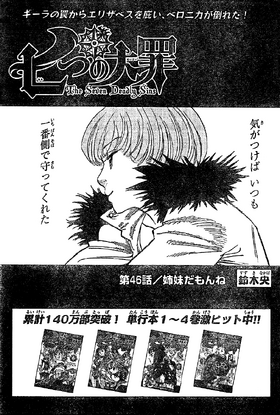 Because We're Sisters「姉妹だもんね, Shimai da mon ne」 is the 46th chapter of Nanatsu no Taizai.

Elizabeth, not believing what has just happened, pleads for Veronica to open her eyes, as Griamore runs towards the two, greatly worried about the latter. Veronica regains consciousness, questioning where her sister is, and whether she was hurt. Veronica, smiling, comments that Elizabeth has a knack of being in trouble, and remembers an episode of when Elizabeth was four, and had escaped from the castle, only to fall under a small valley when the bridge over it collapsed. Veronica had protected and comforted her sister despite injuries to herself. Smilingly concluding the remembrance, Veronica replies to Elizabeth's comment that her being adopted does not matter, to which Elizabeth tearfully apologizes for declaring that she hates Veronica. After Veronica tells Elizabeth that she loves her, again, Griamore, having removed his helm, apologizes for not being a capable subordinate she could trust in. She rebukes him, replying that she trusts him even now, and after giving him his last order, to protect Elizabeth, passes away in Elizabeth's arms, to Elizabeth and Griamore's great grief.

Meanwhile, the barrier around Jericho and Guila is vanishes due to Griamore's emotions making his ability unstable. Griamore tearfully and angrily turns to attack Guila, but is defeated with one attack from behind. Jericho states her worries about injuring the son of a Great Holy Knight, and comments on Guila's insane nature when she suggests to merely report that the Deadly Sins killed Veronica and Griamore. As Guila walks towards Elizabeth and asks her to come with them, a collapsed Griamore angrily questions them as to Hendrickson's goal. Immediately as Guila replies that it is the resurrection of the Demon Clan, Ban, despite heavily injured, attacks Jericho, stating that he cannot take a nap after hearing that. Guila then captures Elizabeth, who, hugging Veronica's body, tearfully pleads for Meliodas to rescue her. As Guila tries to calm her, saying that Meliodas would not be rescuing her now, and Elizabeth once again cries his name, the Goddess Amber, inside which Meliodas is sealed, begins to darken, and then shatters, releasing a black colored substance, quickly forcing Guila to step back.

The black colored substance, which Ban's recognizes as similar to the demon he fought in the Fairy King's Forest, collects and forms Meliodas, the right portion of whose body is completely colored black from forehead to knee, with a spiral like design in a few areas; his eyes are also black. Guila wonders, while holding Meliodas' sword as to how is alive, only to find her hand cut before she could even notice any movement. As Hawk, shocked, gapes, Meliodas, completely emotionless, is holding Guila's cut hand, which is still grabbing his sword.