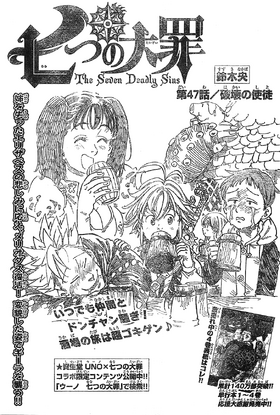 Apostle of Destruction「破壊の使徒 Hakai no Shito」 is the 47th chapter of the manga, Nanatsu no Taizai.

The spectators, Ban, Jericho, Hawk, and Elizabeth, watch the proceedings with utmost shock, as Guila screams in pain, due to Meliodas having severed her left arm. The young man, the left part of whose body is black-colored, separates Guila's severed arm and his sword, which it was still grabbing, and proceeds to attack Guila and Jericho with single swing of his sword, which, much to the Holy Knights' surprise, contains a great amount of power. Noticing that Guila is dying, Jericho desperately bursts an Incantation Orb that contained the "Super Recovery Spell". As Guila rejuvenates due to the spell, Jericho questions on how Meliodas was able to escape the Goddess Amber. The former answers that the stone was inescapable only for the "Reactor Class", such as themselves; Guila then informs Jericho of Helbram's hypothesis: Meliodas is a human being who acquired the powers of demon blood, similar to the Reactors, and was the first to do so.

Jericho ponders on whether the situation is much graver than thought, and is abruptly interrupted by Ban, who confirms. He reveals that he also healed himself with the Holy Knights' Incantation Orbs, and has stolen some of them. As the two turn to confront Ban, he yells a warning in vain as Meliodas attacks, further injuring them. The Sin of Greed tries to fight, only for him to be instantly severed into two by the apparently mindless Sin of Wrath. Elizabeth and Hawk question each other about Meliodas' strange behavior. The princess closes her eyes as the destruction around them continues, and upon opening them again, discovers that the entire area has been leveled, with the area where she and Hawk where on, being an elevated surface compared to the rest of leveled area. Meliodas, standing in front of her, leans close, and smells her. Then seeming to notice something, he raises his left arm, manipulating the black-colored substance on it to form a single wing, and flies with great speed.

Meanwhile, in the location of Helbram and King's battle, Helbram notices Meliodas flying towards the two. He warns King to not attack, as Meliodas lands, the impact pushing King behind. The black-colored material returns to Meliodas' left arm, as he attacks Helbram with his broken sword, but is easily stopped. Meliodas, interrupting Helbram as the Holy Knights begins to speak, punches him in his face, and as the man topples, jumps, and kicks him in the chest. Helbram dodges before he can he further attacked; Meliodas rushes towards him and delivers a barrage of punches, only to be sent flying by a single attack from his opponent. As Meliodas gets to his feet, Helbram states his deductions that Meliodas is fundamentally different from the New Generation, questioning him whether he was "mixed", that is, whether Meliodas had demon blood in him, from the beginning.

Retrieved from "https://nanatsu-no-taizai.fandom.com/wiki/Chapter_47?oldid=126063"
Community content is available under CC-BY-SA unless otherwise noted.