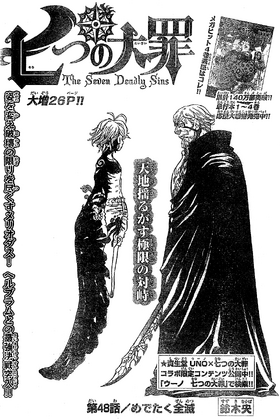 Helbram states his deductions: Meliodas, who had the blood of a demon from the beginning, is completely different and much more powerful from those who gained it later, such as Guila or Jericho; the Goddess Amber thus couldn't seal him. When Meliodas does not respond, Helbram speculates that Meliodas is not able to understand speech, and then readies himself to fight Meliodas, in order to test the Deadly Sin. Meliodas, in response, raises his left hand, and manipulating the black-colored substance on it to form a giant axe-like blade, attacks with it. Helbram blocks the attacks and remains unscathed, and commenting that he would have to fight seriously, attacks Meliodas with his sword when the latter attacks, sending him flying. Helbram believes that he has split Meliodas into two, only to be disproved, when the black-colored substance on Meliodas' body is shown to have shielded the sword attack. As Meliodas manipulates the substance to form a wing, and flies towards Helbram, the Holy Knight forms three glowing orbs and uses them as projectiles, that automatically fly behind Meliodas when he evades the first attack, and explode when Helbram flicks his fingers.

Meliodas again gets to his feet, uninjured, leading Helbram to further deduce, and note down in a book, that while Meliodas' strength has increased, he has lost his ability to use Full Counter, which may be due to loss of reason, or due to an alternate personality. As the Holy Knight finishes, Meliodas manipulates the substance on his body to form giant hands with very sharp claws. Meanwhile, Marmas senses Meliodas' power, but as he begins to leave, to protect Guila and Jericho, is stopped by Howzer, who demands why Marmas used force on a non-resisting human, Diane, and an innocent civilian. Marmas retorts that Diane was a criminal, whether she resisted or not, and no human, but a giantess. Enraged, Howzer states that Marmas is more of a criminal, that a "giantess" who put herself in harm's way to protect a civilian, calling him "roly-poly". Infuriated by the insult, Marmas decides to fight his fellow Holy Knight, dismissing the thought that Helbram would be defeated. As the both ready themselves, they are shocked at the sudden arrival of Hawk's mother, who drops Diane's clothes into the chasm, in which the giant fell.

In the other battlefield, Meliodas attacks Helbram with his two giant hands formed by the black substance. Helbram easily stops the hands, and declares that Meliodas would not be able to defeat his ability, "Link", which allows Helbram to use the powers of all his allies, not very differently from Ban's "Snatch", which robs the abilities of others. He adds that Meliodas would not be able to defeat the powers of twenty of the Holy Knights, as, indeed, twenty of Helbram's allies are shown surrounding a small orb, meaning that they are giving Helbram their abilities. The Holy Knight attacks Meliodas and states his intentions of taking the Deadly Sin back. However, the Meliodas quickly attacks back with his giant hands, injuring Helbram, and surprising him and the other Holy Knights who are giving him their strength. As they, shocked, realize that Meliodas' power is increasing, and that he is not yet in a complete state, the Great Holy Knight, Hendrickson, walks towards them and lends Helbram some of his own power. His strength now dramatically increased, Helbram easily sends Meliodas flying with one attack.

Commenting on Hendrickson's terrifying power, which allowed him to defeat Meliodas, Helbram states that with all the Holy Knights defeated, he has to take the Sin of Wrath, his sword, and Elizabeth, which will end the mission. Meanwhile, Marmas tries to frighten Hawk's mother into leaving, as Diane, now fully returned to her usual huge size, climbs up from the chasm, and crushes Marmas to the ground, much to Howzer's surprise.