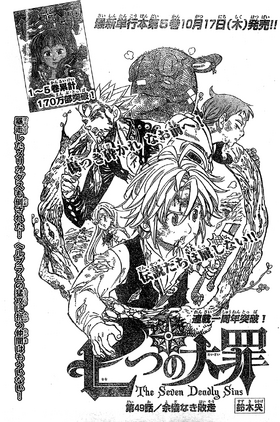 Helbram puts on his helm, and levitates towards where Meliodas crashed after he was defeated, intending to capture the Sin before he goes on a rampage again. Elizabeth tries to yell out, but is stopped by Ban, who is holding an unconscious King, and instructs them to escape the area immediately. Elizabeth and Hawk refuse, not wanting to leave Meliodas, leading an irritated Ban to escape while carrying Elizabeth, with Hawk running behind. As they escape, Elizabeth notices Griamore holding Veronica's body. Helbram comments on how the criminals' escape after being humiliated fits them, and states his intentions of going in their chase after capturing Meliodas. Instantly, the part of the mountain where he is standing on is cut, with the assailant being none other than Diane, who now has Gideon. Diane worries about Meliodas, unconscious and lying on her palm. Helbram, interrupting Diane, offers to not capture Diane, and the others, if she hands Meliodas and Elizabeth to him. Diane refuses, leading Helbram to declare that she would not be able to defeat his "Link", which her "measly" Gideon.

As Diane, enraged, prepares to attack with her giant hammer, Hendrickson orders Helbram to retreat, and stresses, when Helbram hesitates. Just as the Holy Knight begins to leave, Diane slams the ground with Gideon, using a technique named "Mother Catastrophe", that obliterates the ground. Helbram rescues Jericho and Guila, and climbs the huge ray-like creatures along with Marmas, riding which Guila, Jericho and Marmas arrived in Vaizel. While Ban, carrying Ban and Elizabeth, and Hawk escape from the effects of Diane's technique, the creature Helbram was riding is stabbed by a rock, which then also pushes Helbram off it. He comments on the immense increase in power of a Deadly Sin that wielding a sacred treasure creates, as a huge part of the mountain, a gargantuan boulder, is sent flying high in the air due to the power of Diane's technique. The boulder comes crashing down, breaking the connection of the Holy Knights with Helbram, leading them to speculate Helbram's death. After the attack's effects have ended, Meliodas wakes, still lying on Diane's palm, prompting her to cuddle him, hurting him due to his injuries. Ban, sitting with Elizabeth and Hawk near the gargantuan boulder, is then revealed to have wanted to escape previously not from Helbram, but from Diane.