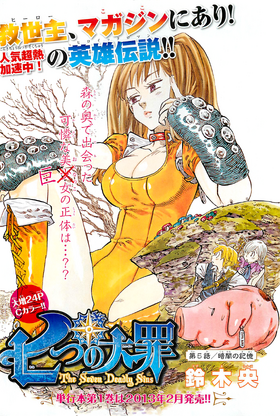 3
Dark Memories「暗闇の記憶, Kurayami no Kioku」 is the 5th chapter of the manga, Nanatsu no taizai.

Having woken woken up by the Prankster Imps, who apologize for letting Meliodas, Hawk and Elizabeth pass, as they believe them to be Holy Knights, Diane meets her captain for the first time in ten years. After a discussion about the events that caused them to be labelled as traitors, Gilthunder suddenly arrives and binds all of them with his lightning magic.

After being defeated by Meliodas, whom they believe to be a Holy Knight, the Prankster Imps retreat to the sleeping Diane, while unintentionally leading him, Elizabeth and Hawk to her. Immediately after they awake her by apologizing for letting a "Holy Knight" pass, she lifts Meliodas with her hand, only to start cuddling him and crying tears of joy when she realizes that his identity. When Diane learns of him traveling with Elizabeth, she throws a temper tantrum, calling him a "cheater", and saying that he has "scarred a woman's heart".

Meliodas, calms her down, explains to her the reason he and Elizabeth were traveling together, and then informs her than he has almost no memories of the day they went to meet the Great Holy Knight, much to her surprise. Meliodas then begins to narrate the only memories he has: that day, the Seven Deadly Sins, then still being an active group of knights, were summoned by the Great Holy Knight to the outskirts of the town on the National Foundation Day. However, when they entered the room, they found him skewered to death by multiple swords, much to their surprise and shock, since killing a Holy Knight, who was a "God of War"-like entity, was equivalent to treason. Suddenly then, they were surrounded and attacked by all the knights of the kingdom. As Meliodas instructed them to disperse and regroup afterwards, and wondered as to what had happened, he was apologized to, with the apology being his last event he remembers of that day. He also says that when he woke, he was lying in a hole, which was where he met Hawk.

The narration leads Elizabeth to speculate the existence of a traitor in the Seven Deadly Sins, and their framing for the murder of the Great Holy Knight. Hearing that, Diane declares that she will help Meliodas no matter if it is a traitor or a Holy Knight and tells Elizabeth that the reason she is helping them is only for Meliodas, which leads the Prankster Imps to rejoice, since they were threatened to hide Diane by herself lest she go on a rampage. Suddenly, they notice a gigantic thundercloud in the sky; a lightning bolt then binds all of them and the assailant is revealed to be Gilthunder, the Holy Knight who had sealed Bernia's river's water source before.