In the Depths of the Heart 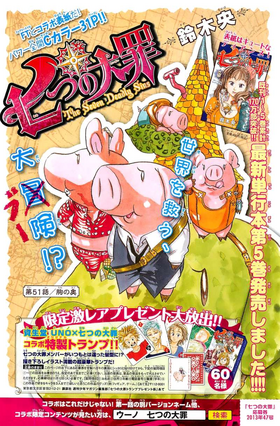 In the Depths of the Heart「胸の奥 Mune no Oku」 is the 51st chapter of the manga, Nanatsu no Taizai.

Howzer returns to the kingdom where he soon learns of Veronica's and Griamore's reported death from Gilthunder, who further mentions that Hendrickson's group has been increasing dramatically in size over the past few days. At the same time, Meliodas and the rest settle in a deserted forest near Ordan, preparing to search for the rest of the Deadly Sins. Elizabeth recollects memories with Veronica and swears to return peace to the kingdom, when Diane appears, having overheard her, tells her that everyone will support her. Feeling frustrated about being left out, Hawk searches for the rest of the members and soon discover Ban and King sparring, with Ban revealing that he plans to obtain the Horn of Cernunnos and that he is frustrated by how Meliodas possesses demon-like abilities. Everyone begins to gather around Meliodas who was collecting his thoughts besides a river, when he suddenly splits apart a mountain with a twig.

There was a sparing scene between Ban and King.

Retrieved from "https://nanatsu-no-taizai.fandom.com/wiki/Chapter_51?oldid=126205"
Community content is available under CC-BY-SA unless otherwise noted.