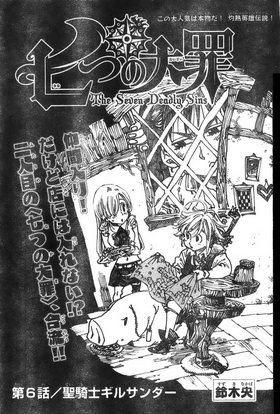 3
The Holy Knight Gilthunder「聖騎士ギルサンダー, Seikishi Girusandā」 is the 6th chapter of the manga, Nanatsu no Taizai.

Meliodas battles Gilthunder, purposely allows the Holy Knight to slash him, and under the pretense of dying due to the grave wound, acquires information about the whereabouts of two members of the Seven Deadly Sins, King and Ban, as his apparent last wish.

As Gilthunder binding everyone with his lightning magic, Elizabeth recognizes him, and explains that Gilthunder was a Holy Knight very close to her father and was a brother-figure to her, but soon realizes his true intentions and the fact that it was he who had blocked Bernia's water source. Gilthunder says that while the kingdom's priority was to ensure her safety, she is a "grain of sand in the path to the Holy Knight's rule" and releases her, allowing her to escape. She, however, does not do so, refusing to let him harm Meliodas and Diane, and runs after Hawk after Gilthunder kicks the talking pig out of the way.

Gilthunder, pointing his sword at Meliodas' neck and saying that he wants to avenge his father, and also wants to prove he has surpassed him, declares that he is stronger than any of the Deadly Sins, and says that he will unbind him and Diane to fight them. Before he could do so, however, both easily break his spell themselves, with Meliodas instructing Diane not to interfere in their battle. Gilthunder attacks first, making a powerful lighting bolt strike at Meliodas. The Sin of Wrath easily repels the spell back at Gilthunder, but the latter dodges the attack and gets behind the former, slashing him from behind and causing him to fall to the ground.

Gilthunder question Meliodas for last words, and Meliodas, seemingly in his last moments, Meliodas asks for the whereabouts of the other five members of the Seven Deadly Sins. Gilthunder answers, telling him that while the whereabouts of three of them remain unknown, it is known that the Fox's Sin of Greed is imprisoned in the Baste Dungeon and the Grizzly's Sin of Sloth has perished in the Capital of the Dead. Hearing that, Meliodas quickly jumps back up, implying that he had tricked Gilthunder into revealing the information about the two Deadly Sins.