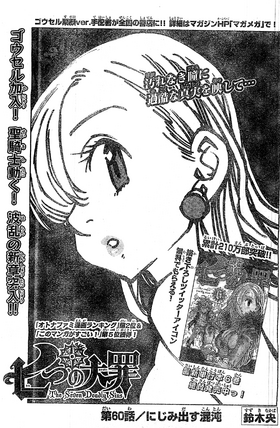 A Creeping Chaos「にじみ出す混沌 Nijimidasu Konton」 is the 60th chapter of the manga, Nanatsu no Taizai.

Dreyfus finally returns to duty after a long period of locking himself in his room and grieving for Griamore's death. He encounters Howzer who notices that he is completely worn out and reports to him that more New Generation Holy Knights are appearing exponentially, causing an unbalance between the strengths of the two Great Holy Knights. Meanwhile, Gilthunder visits the first princess, Margaret, who is locked in a dungeon. He informs her that her sister Veronica has been killed by the Seven Deadly Sins, however, she immediately disbelieves him stating that it must have been the treacherous Holy Knights whom have ended her life.

Outside the castle, Guila and Jericho are sparring, when the former suddenly notices that the latter appears to be distracted. Jericho questions Guila whether Helbram was hiding something from them and mentions that she saw the Deadly Sins engage in the fight with the Armored Giant. After mentioning that she felt both demonic and Holy Knight powers emitting from the creature, she hands a locket necklace, leaving Guila completely bewildered. At the same time, Helbram and Hendrickson discuss about the Old Generation and the New Generation, before attempting to unseal the gate and summoning and releasing demons into the world. Not long afterwards, the two realize that they are still missing pieces and are still unable to completely unseal the gate. The Seven Deadly Sins continue their journey, when the group asks Meliodas where they are heading towards. To their surprise, their captain states that they are going to infiltrate the Kingdom of Liones and retrieve his Dragon Handle.

Retrieved from "https://nanatsu-no-taizai.fandom.com/wiki/Chapter_60?oldid=127255"
Community content is available under CC-BY-SA unless otherwise noted.